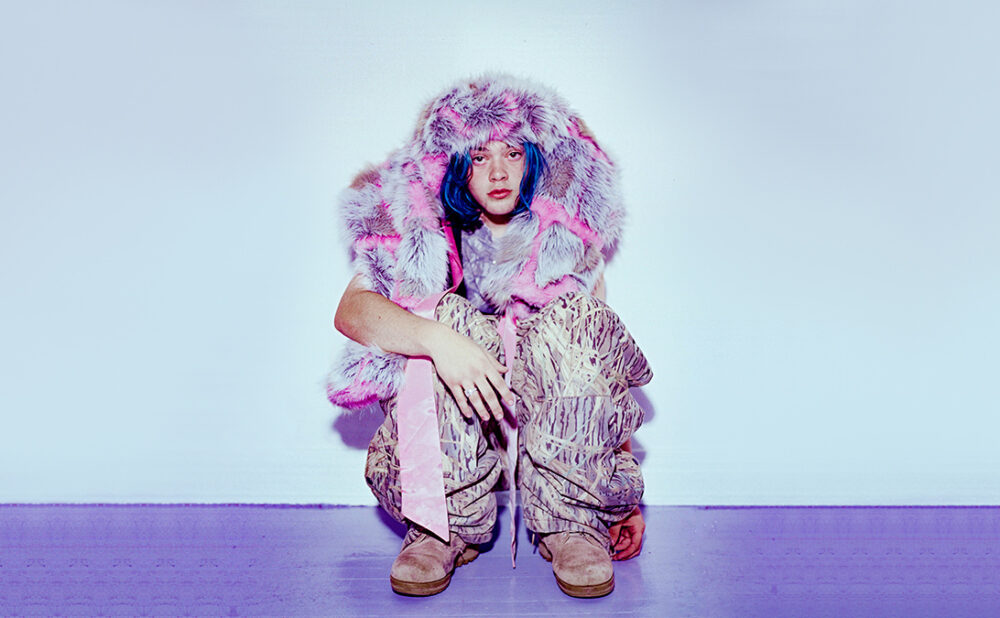 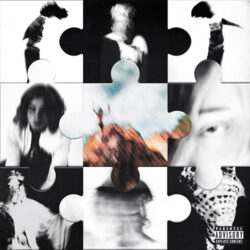 Sound: Raspy vocal chants punctuated by biting percussion and reverbing electronics.
If you like: Yung Lean, Jack Kays, YUNGBLUD
Why you should listen: Like an angsty early 2000s punk song with darker edges and viral beats, this Cambridge, ON, TikTok talent offers gritty and honest musings to the tune of headbang-able hooks
Best track: Superstar

What happens when an artist bursts from the tiny 9:16 TikTok frame and leaps onto a physical stage in front of a real live crowd?

Eighteen-year-old viral punk pop star Aidan Fuller is about to find out.

Fuller, who goes by 347aidan, is part of the league of newly minted musicians who blew up on TikTok during quarantine. His inner-demon-riddled lyrics and gritty-catchy sonics have earned him over six million monthly Spotify listeners, over one million feverish TikTok and Instagram followers and an opening spot on tour with eccentric internet pop phenom Oliver Tree in 2022.

Aside from a barely legal bar gig when he was 13 in his hometown of Cambridge, ON (a whole two people attended), Fuller has never performed live before. After observing his career skyrocket from his bedroom, does it all feel real?

“When stuff that’s so surreal like that happens to me,” he explains about signing with Columbia Records last year, mere months after beginning his TikTok journey. “I try to imagine that it’s not real, which sucks. I try not to get super excited about it. I know I’m a real human waking up every day with real supporters and a real fan base. But what does it mean for everything to feel real? I have no clue.” 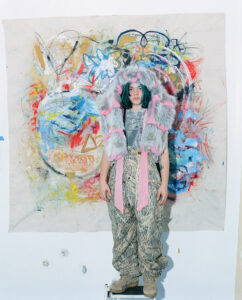 Surrounded by a massive speaker and three chaotically coloured, Basquiat-esque paintings of scale, Fuller answers my Zoom call from his new digs in L.A. He just moved out of his family home by himself for the first time. Apologizing for being five minutes late, he explains that he was going live on Instagram, something he does several times a week to stay connected with his uber supportive followers. Since just joining TikTok in early 2020 as his high school was locking down in the wake of COVID, he’s built a fiercely loyal fanbase through posting snippets of tracks laid down in his childhood bedroom, most of which don’t shy from sharing moments of misery while struggling with mental health.

It was only a matter of months and a few hairstyles later — he’s got a penchant for dying it bright, bottled shades — before tracks like anti-establishment Demons & Monsters and surprisingly charming love bop Dancing in my Room went viral.

Combine his brutally honest lyrics, his gravelly, over-enunciated delivery reminiscent of Blink 182’s angsty drawn-out vowels and his boyish punk rock charm, and it’s easy to see why his comments are full of listeners who either have good old teenage crushes on him, feel seen by his pain or both. Last time I checked, there were 44 347aidan stan accounts on Instagram alone.

He’s not some clout-thirsty e-boy coasting on a couple of hits, though. Fuller’s raw talent and rock-solid fandom set him apart from the noise. A sizeable portion of his fans have been following him far before his tracks hit main street — voicing this in the comments section seems to simply be considered good form among 347aidan enthusiasts.

“Aidan, the entire fandom is so fucking proud of you,” says one YouTube commenter.

“I feel like I’ve watched you grow as an artist and person,” another exclaims on TikTok.

The feeling is mutual: somehow, during this interview, even though Fuller’s eyes are on the Zoom screen the whole time — he manages to post on his Instagram saying, “in my interview rn say hi.”

I feel both duped and impressed upon discovering the post. Though the astronomical success of his music might still feel like a simulation to Fuller, it seems that his tight relationship with his fans tethers him to reality — if not this interview.

“My older sister told me the Robinsons across the street were giving away freezies at the end of piano lessons. I walked over and started piano lessons that day,” he bemusedly recounts. “Little did I know, I would end up liking it.” 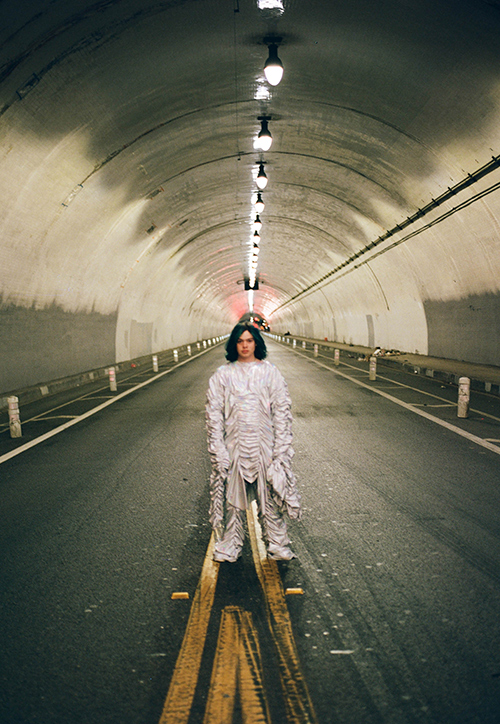 Though Fuller is intimately acquainted with his darker emotions, he’s got a sweet disposition: throughout our interview he’s laid-back, smiling and full of surprisingly wholesome anecdotes like this one. Maybe it’s because he’s young enough to be someone I could have babysat, maybe it’s because his lyrics tell me he’s been through a lot, maybe it’s because he’s living by himself and figuring it all out for the first time — but I find myself hoping that Hollywood takes care of him.

Around age 12, inspired by artists like Mac Miller, XXXTentacion, Yung Lean, Odd Future and the grossly corporeal, crunch rock track Brain Stew by Green Day, Fuller started playing around with making songs — by 15 he’d posted his first on Soundcloud, a rap track in which his pre-pubescent voice postures about swigging Hennessy and jumping into Maseratis.

“I think back to it and I try to put myself in the mindset that I was in when I was making rap music, and I almost can’t do it,” he reflects. “I have trouble creating the character I was portraying back then. I have a lot more fun making different characters with my current music, which is more punk.”

Though his fans are in no short supply, Fuller wasn’t always a Starboy. He took a lot of shit from people before finding success.

“There was a moment where people were really bashing on me in my hometown for my music, for some reason,” he says, still unsure of why. Despite always knowing music was what he wanted to pursue, he lost confidence in himself. But there was one person who pulled him out of it: her name was Harmony Parsons.

“I didn’t have that many close friends growing up — she was one of my actual friends. I really looked up to her, because — with peace and love — she had a really messed up life. And she somehow strived through every situation she was in. She had dealt with people bashing on her before.”

Anytime Fuller was stressed about people hating on him, “she would call me and be like, ‘Fuck them, keep making music, send me another song’.”

He credits Harmony for building his confidence to the point that he posted his first track. But just one year later, at the age of 17, she tragically died.

“It really, really destroyed me. Weirdly, now that I look at it, it changed my life for the better — I was in a terrible place, doing things that were not good for me. Her passing made me change that. My only focus became music. And I feel like I’m honouring her life by being so confident in my music and letting people know who I am,” he says openly.

And who he is resonates. Fuller has spent a lot of time lost in the depths of his own mind — by opening up about that isolation through his music, he’s both healing himself while acting as a guiding light for the loners, misfits and misunderstood. COVID-induced isolation has exacerbated the mental health crisis — compound that with the already higher-than-ever rates of depression and anxiety among young people and it seems 347aidan is showing up when he’s needed most. People share their struggles and feel seen in the community he’s built. 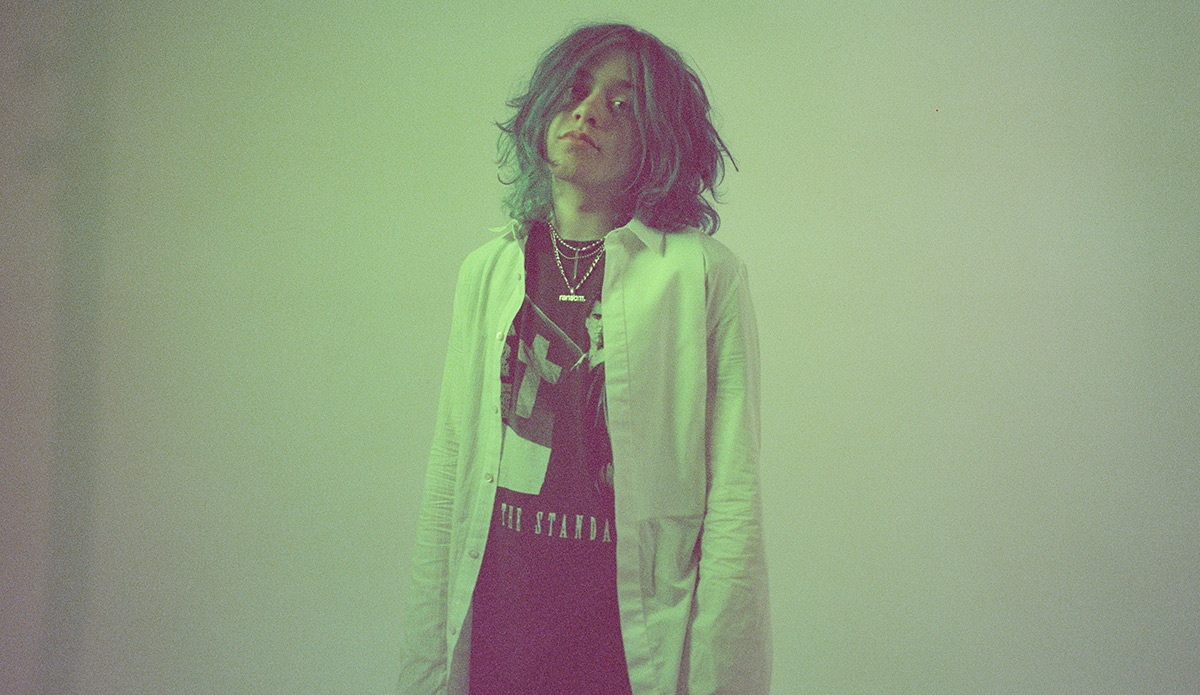 Though only nascent, his career has already brought him full circle: in creating 347aidan, he’s gone from the lonely guy people made fun of to a support for those struggling with their own isolation and demons.

Fuller’s on a mission to spread positivity — it resonates through his sonic repertoire and cuts right down to his moniker. In a TikTok, he explains 347 to be a mix of the numbers 34 and 47, digits he claims to represent “peace and live forever,” because he wants his music to bring peace to people and have longevity.

Its punchy percussive spine supports electric reverbs as Fuller’s layered shout-chant vocals tell the story of how he got here: self-medication, painful loss, grappling with newfound fame but ready to live out his dreams.

Though he may still feel dissociated from his brink-of-superstardom reality, Fuller says when he performs live for the first time it will no doubt snap things into relief.

“I don’t really know what to expect. But I know that stepping onto a stage and looking at a bunch of people who are waiting for what I’m about to say is just going to put me in a mode of being exactly who I am.”

Iceland Still Packed With Musical Choices, Even Without Festival