A look behind the curtain reveals intimate scenes that humanize the hockey stars and their bosses. 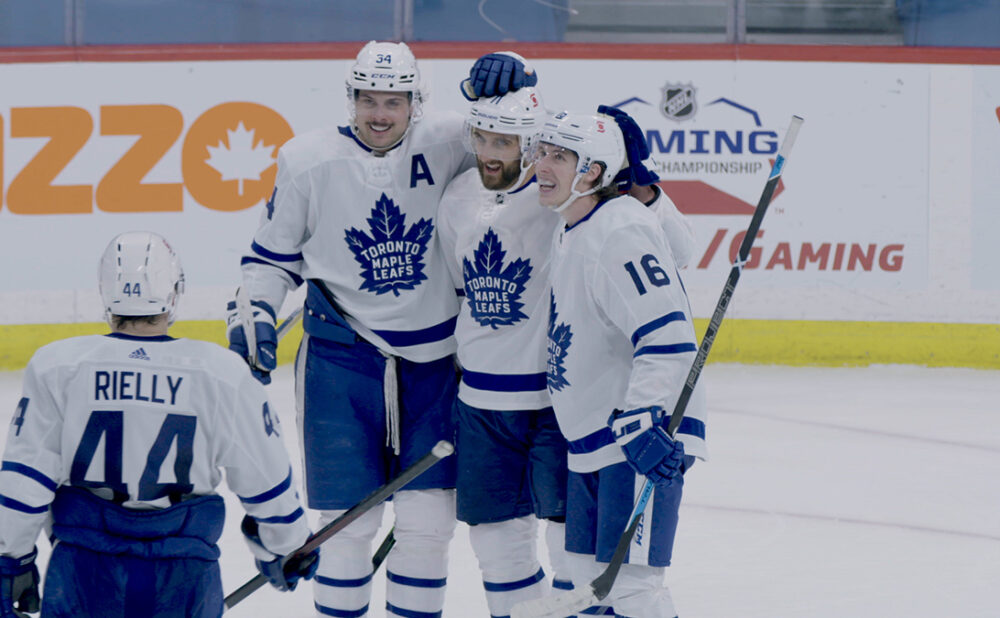 Name: All or Nothing: Toronto Maple Leafs
Where: Amazon Prime
What: Limited Series, 5 episodes, 48 mins.
When: Now
Genre: Behind-the-scenes documentary
Why you should watch: A remarkably candid look behind the scenes and deep inside the Toronto Maple Leafs’ most recent season — one that started with promise and ended in disaster. Fucks and pucks fly with equal intensity and frequency as we see intimate moments between coaches and players as well as crusty on-ice banter from miked skaters.

NEXT chats with goalie Jack Campbell

Personable Toronto Maple Leafs goalie Jack Campbell’s biggest hope for fans viewing the new Amazon Prime, behind-the-scenes documentary on his team is that Leafs lovers will come away knowing how much the players actually care.

Speaking with NEXT just before the doc, All or Nothing: Toronto Maple Leafs, started streaming this month, the goalie — who stole the team’s starting job last year along with the hearts of many Leafs fans — is as likeable and sincere as the sometimes-teary-eyed player we saw last season as Toronto’s favourite losers came up short yet again, despite an incredibly promising regular season.

Of course, it shows how devastating it is to fall short of a goal, but I think it also shows how much we care and how badly we want to get to that goal.

While Leafs haters in Calgary and Vancouver might have delighted in watching the storied team’s collapse earlier this year, it was tough viewing for fans of the perennially disappointing squad.

The show is packed with raw behind-the-scenes footage that sometimes painfully shows all of the promise that slowly and inevitably slips away. Campbell has these words of advice for fans who might dread re-living such a disappointing year:

“It’s like anything in life: if you look at just the end result, sometimes you miss some of the great stuff along the way.

“Of course, it shows how devastating it is to fall short of a goal, but I think it also shows how much we care and how badly we want to get to that goal.”

Much of the inner drama that propels the team is revealed in intimate scenes that humanize the hockey stars and their bosses, including foul-mouthed Leafs coach Sheldon Keefe’s interactions with players as he shuffles them through the lineup, and management’s frank and sometimes devastating assessment of the team.

Not surprisingly, Campbell emerges as even more likeable while his fellow goalie, now ex-Leaf, Frederik Anderson remains a stone-faced enigma. There’s not a lot of fresh insight into the team’s salary-cap-gobbling, top four stars — although we learn Auston Matthews loves his dog and his mother, Ema, approves of his moustache because she thinks it makes him look more Mexican (she was born in Hermosillo, Mexico).

Campbell says the team quickly got used to the TV crew’s constant cameras and presence.

“No distraction, really enjoyed it, started to get to know them really well, and they were just super-cool to work with.

“Hockey is a pretty intense sport. We’re just focused on doing our job — whatever they captured, they captured.”

Any surprises in the show?

“I don’t know if ‘surprise’ is the right word, but our bond with one another is pretty special here and when we step into the rink, it’s an honour and a privilege to be a Toronto Maple Leaf, and you’ll see in the show we truly have that passion for representing the Toronto Maple Leafs the best we can.”

I ask Campbell if he has any words of encouragement for fans who suffered through last year’s disappointment and are hoping for the team to finally win, well, anything?

“We’ve got fire in the belly, we’re working hard. That feeling didn’t sit well with us either and just know we are ultra-motivated and ready to go.

“We’re not really talking — we’re ready to walk the walk and be ready.”

And finally win the Stanley Cup?