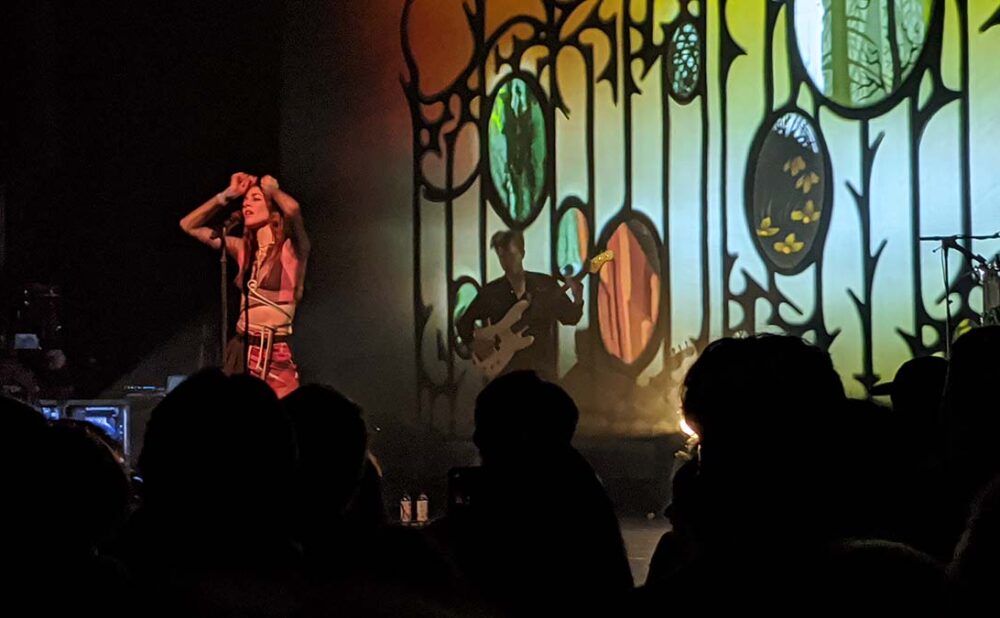 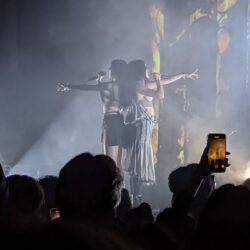 Who: Caroline Polachek
Where: Vogue Theatre, Vancouver
When: Mon., Dec. 13
Vibe: Esoteric art students and queer party femmes dominate the crowd for Polachek’s surreal, baroque-techno set; her aesthetic may be mythical, but her sound is from the far-off future
Highlight: The monumental wave of energy taking over the crowd as Polachek plays her yearning anthem So Hot You’re Hurting My Feelings — a crowd of hundreds screams the lyrics to its cheeky, sexually charged bridge as the stage erupts with the flames of hell. Unforgettable!
Next: With Dua Lipa: Centre Bell, Montreal, Tues., Feb. 22; Scotiabank Arena, Toronto, Wed., Feb. 23

I show up an hour early at the Vogue for Caroline Polachek’s live show, but the line has already snaked its way around the block and into the neighbouring alleyway. I should have expected it — since the release of her independent debut album, Pang, almost two years ago, Polachek has catapulted into the cultural consciousness and cemented a reputation as the cool girl’s cool girl. Her music is full of avant-garde experimentation and tongue-in-cheek coyness, bringing an esoteric edge to the alt-pop scene that her fans devour with fanatical fervour.

This is her first-ever tour under her own name (she spend over a decade as part of the Brooklyn indie band Chairlift, and released albums under aliases until 2019’s Pang), and has such a mastery of the aesthetic that her live performances are often something more like art installations. The main attraction to her shows, though, is her inimitable voice — it has an unbelievable, synthesized quality that almost seems too good to be true, and everyone who knows Caroline Polachek knows you have to see it live to believe it’s real.

I’ve been looking forward to this show for months, and once I finally make it in, I rush for the seats, stopping only to snap a pic of this vaguely Footloose-ian sign posted around the theatre: 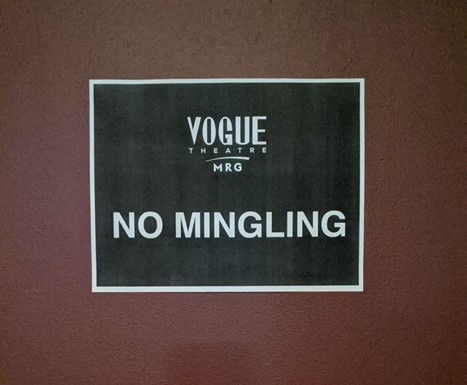 We live in dark times, people! Anyway, mingling is kept to a minimum, although the province’s equally Footloose-ian no-dancing rule is abandoned the second Polachek steps onstage. The hypnotic, undulating Bunny Is A Rider — a bass-thumping pop track that was recently named Pitchfork’s song of the year — gets the crowd leaping out of its seats. When she launches into Ocean of Tears, a baroque track with an explosive, guitar-laden chorus, the people around me headbang like they’re at a Black Flag show.

Seeing Polachek live is a uniquely surreal experience, like visiting a wax museum or trying to touch a hologram: hearing her impossible voice in person, real and undeniable, creates the kind of cognitive dissonance that sends you spinning. It’s the type of voice that you feel must have been written about in myth. To see it coming from the mouth of a mortal is simultaneously humbling and awe-inspiring — Polachek soars like a synthesizer and slips between notes with auto-tune precision, making you certain she must be some kind of folkloric cyborg. 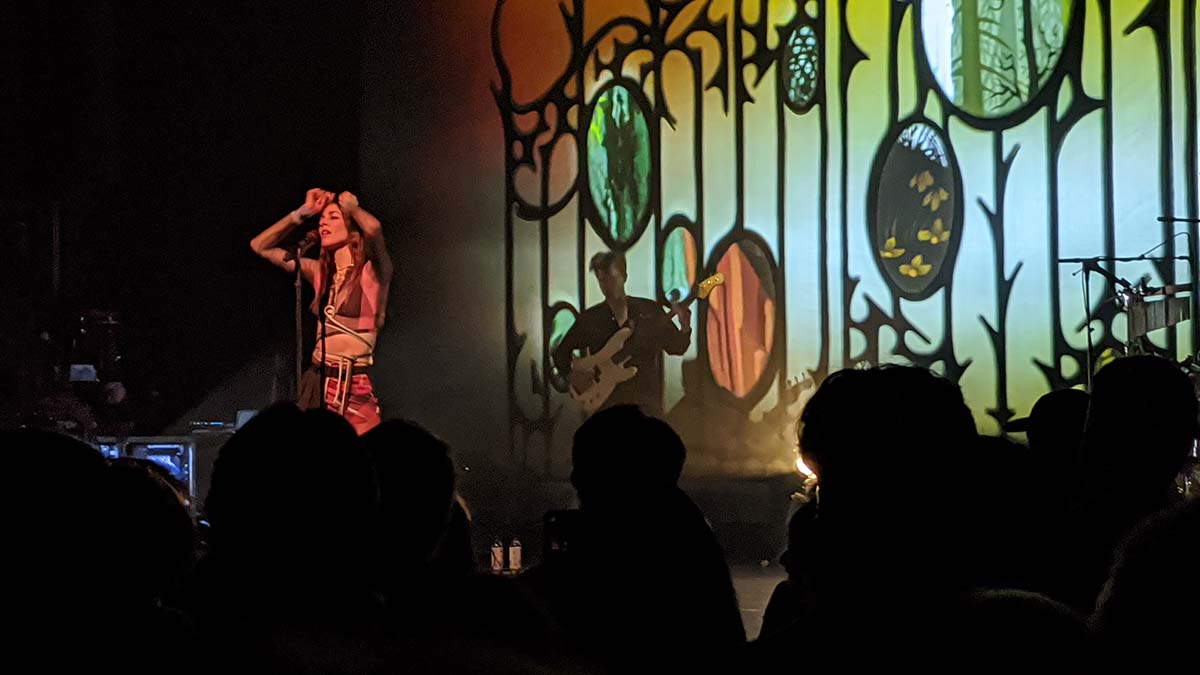 In between songs, Polachek banters with the crowd like the cool-girl icon she is. She knows her audience — her brief quips call out to the “sad girls” and the “empaths” and are met by fanatical cheers of recognition. There aren’t many shows where you could reference sapphic painter Georgia O’Keefe onstage and be met with raucous applause, but a Caroline Polachek set is verifiably one of them. Mid-song, a fan approaches the stage to hand her a single red rose, and she stops singing to thank them for it.

Near the end of the show, Polachek and Parisian opener Oklou join each other in haunting harmony as the gate behind them erupts in virtual flames. It’s an ethereal lead up to obvious crowd favourite So Hot You’re Hurting My Feelings, a slyly sexy banger lamenting the woes of long-distance relationships — by far her most famous song and also one of her most infectious. The people in the front row have memorized her choreography and dance every beat right along with her. 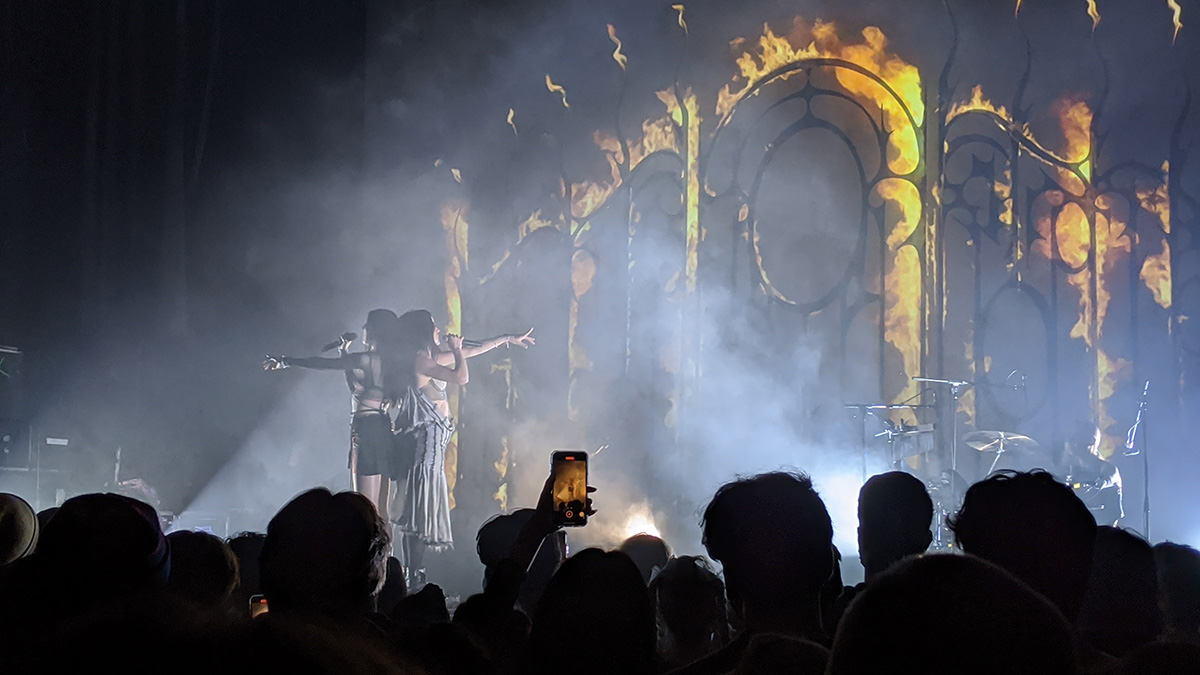 After the show, I wait at the back door for a while, hoping to say hello to her as she exits the theatre — we’d met before, albeit virtually, when I wrote a cover story on her back in November. She’s in too much of a rush to meet the group of fans waiting behind the Vogue, but no one feels slighted. I get the invaluable chance to make the kind of midnight small talk with strangers that I’ve so desperately missed over these past two years.

The consensus is universal: We just witnessed something akin to an act of God. Polachek possesses the kind of undeniable talent that makes people want to watch her and the kind of magnetic energy that makes sure nobody can look away. Throughout her set, she never stops moving, ducking and swaying with palpable joy that’s as unforgettable as her music.

“She was hitting every single beat,” someone gushes to me as we excitedly discuss the set. “It’s rare that you see that — that you see an artist be so into it that they don’t miss a single second.” 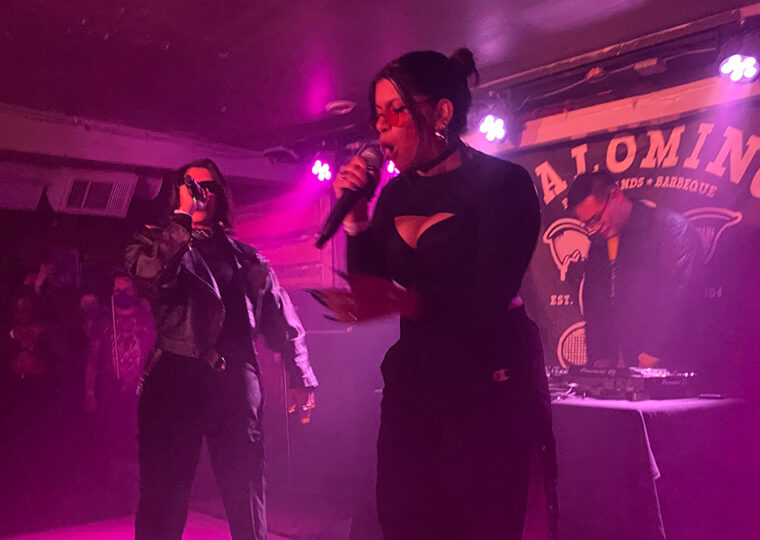 Cartel Madras and Friends Throw a Rager at BBQ Joint