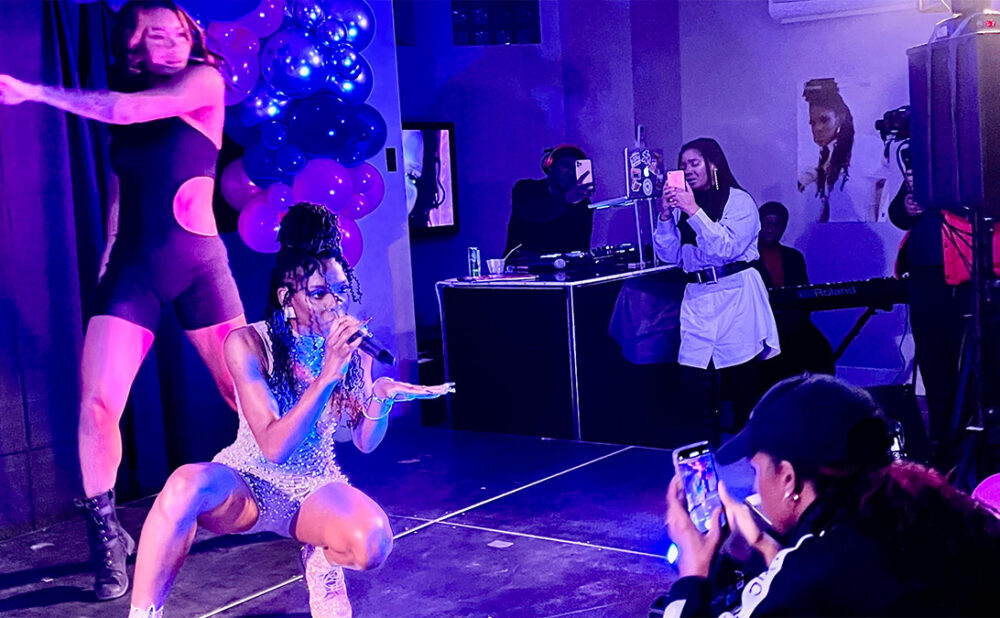 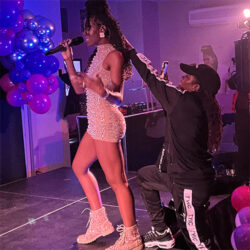 Who: Omega Mighty
Where: Wildseed Centre for Art & Activism (24 Cecil St.), Toronto
When: Sat., Nov. 27
Vibe: Barbarella meets Barbados as the well-dressed crowd could only be topped by Mighty herself. Already dancing to the DJ, audience is in a party mood to celebrate the release of Mighty’s excellent first album — Me and Youforia — which she performs.
Highlight: Could have been the audience dance-off but had to be when the recently ailing sister Haviah — it wasn’t COVID — leaves her perch in front of the stage, where she was filming her sis on her iPhone, and joins Omega on stage for a scorching duet. Mom and Pop Mighty are seen beaming at the show and another daughter, Alicia, plays keys.
Next: Tues., Dec. 14, El Mocambo, Toronto; part of Lemon Stage showcase with Lost in Japan, Cale Crowe and Jaguar Sun. Speaking on virtual panel for the Northern Touch Musical Festival Sat., Jan.15, 2022.

The dancers are dressed for “a night” with Barbarella-inspired leather outfits and boots that reach the sky. Weaving effortlessly, they form a circle and trade off moves as the music pumps — and that’s just the audience waiting for the headliner to appear at this triumphant show that sees Omega Mighty perform her long-wished-for headlining debut.

I have watched Omega Mighty be a regular “guest” at her sister Haviah Mighty’s shows for years since the early days of Haviah’s career. And each time I saw Omega slide on stage to join her sister for a crowd-pleasing show highlight on the island-inspired track Wishy Washy, I have dreamed of seeing her perform her own headlining set.

I clearly share this desire with about 80 friends, family and more — even Mom and Dad Mighty are here — as we excitedly gather on Saturday night in the Wildseed Centre, a new cultural space around the corner from the El Mo, created by Black Lives Matter activists to support young Black artists in Toronto.

Like a cloud ready to release a thunder clap, the room is all coiled energy as the crowd is pumped up even more with a super-charged intro from an Omega-pal that is a show in itself.

Mighty isn’t afraid to change things up: she sometimes turns a dance track into a ballad, her dancers performing a ballet as Mighty reclines, diva-like, across the stage, singing while they pirouette.

When Mighty slinks on stage in a shimmering, skin-tight hot-pants suit, she takes command like a seasoned pro, making it almost impossible to believe this is her first headlining gig.

It’s a performance so polished, so action-packed that, at times, it’s easy to imagine the set is playing in an arena; the only things missing are bigger sound and lights — and 18,000 people.

But those days might not be far off as Mighty shows herself equally skilled at both dance tracks and ballads from night club vibes to Caribbean dance hall. Mighty gives a mesmerizing show with endless audience smiles interrupted by regular, enthusiastic whooping.

Mighty is a skilled dancer and choreographer. She consults with The Arkells on moves for their stadium shows and her debut features visits from her dance pack, who raise the energy even higher each time they’re on the stage.

Mighty isn’t afraid to change things up: she sometimes turns a dance track into a ballad, her dancers performing a ballet as Mighty reclines, diva-like, across the stage, singing while they pirouette.

Sis Alicia Mighty accompanies on keys throughout the show. Haviah Mighty prowls in front of the stage much of the night, bagging photos for the Mighty Family Album and videos for her socials. At one point, Haviah pops up halfway on the stage to adjust her sister’s hair.

Haviah is eventually coaxed up, and she and Omega reinterpret Drip Dreaming into something halfway between ballad and banter. Haviah has been ill — not COVID — and when the sisters hug at the end of their show-stopping duet, it’s extra poignant.

Mentioning a childhood of music lessons, talent shows and recitals, Mighty jokes that she’s been preparing for this night her whole life — and that’s easy to believe.

As Mighty again builds the show back up to a fever pitch, she brings one of her choreographers on stage to perform a dance created for the track. The crowd dances as hard as the on-stage crew, and Mighty puts on the brakes and declares the audience dancing to be so great there needs to be a dance contest.

“Come on up here, don’t pretend you don’t know how great you are,” she says, and about eight stylish audience members confidently make their way on stage, taking turns stunning the rest of the crowd and, no doubt the many Mightys in attendance, with their moves.

With the result declared too close to call, Mighty demands a dance-off by the two leading contenders, who happily oblige. As the deserving winner returns to the floor amidst a roomful of cheers, Mighty retakes centre stage with an assurance that carries her the rest of the night

It’s impossible not to see at least the ambition of Rihanna when you see Omega Mighty on stage; is it unreasonable to think she has a shot at that kind of success? Let’s see what size rooms Omega Mighty is playing 18 months from now. There will be more than friends and family there.

The night feels like a “star is born” moment in a small but important new Toronto venue. 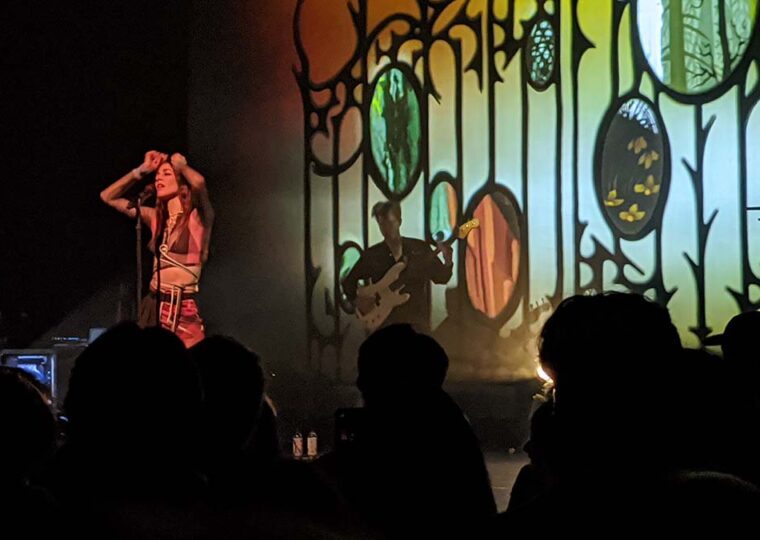