After almost two years of forced pandemic hibernation, it was hard to believe it could be real when Stampede released their all-Canadian music lineup a couple of weeks ago. 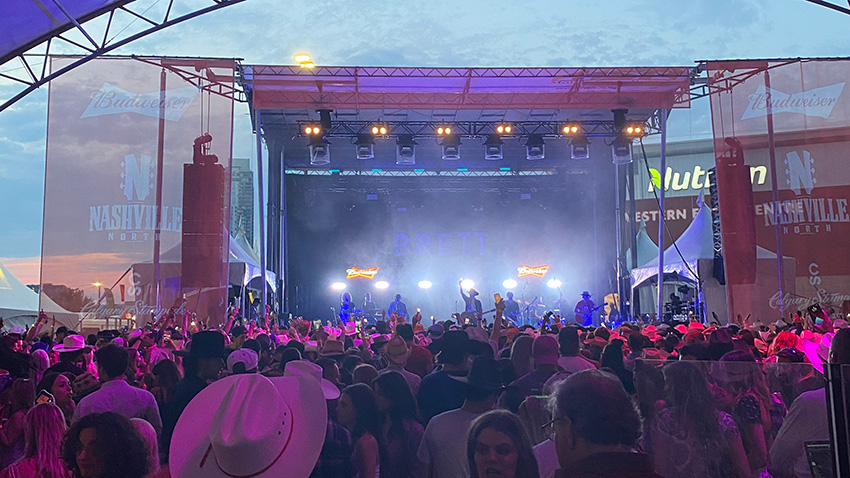 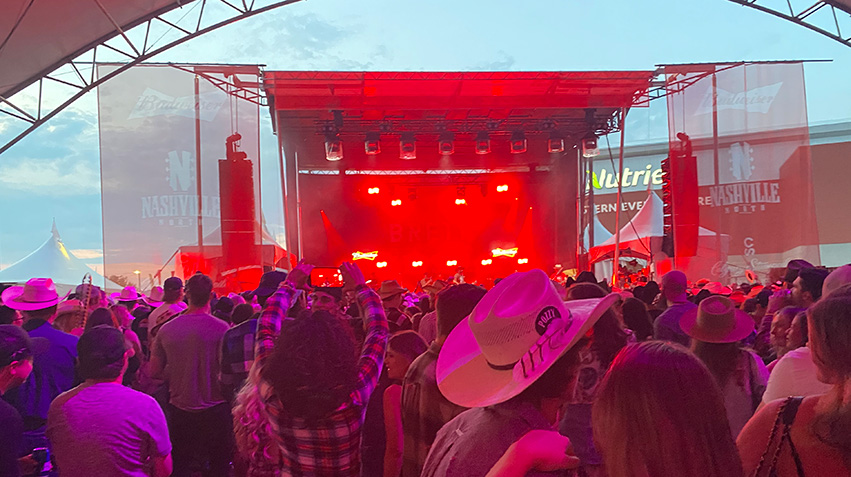 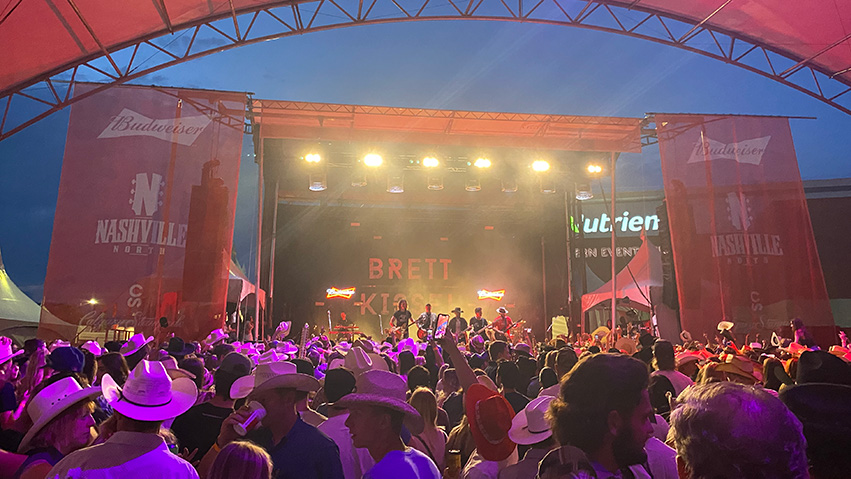 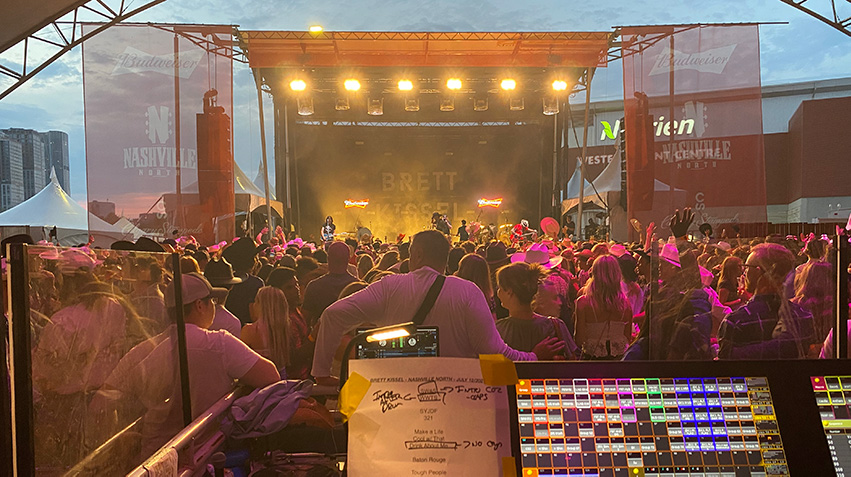 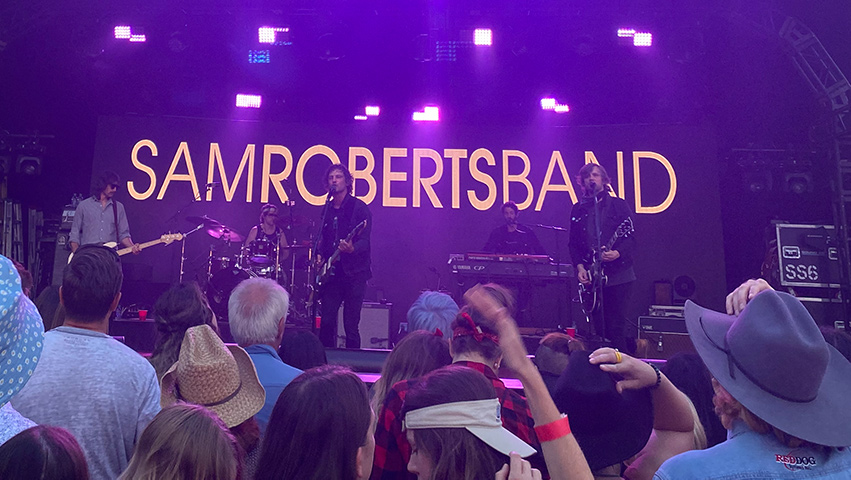 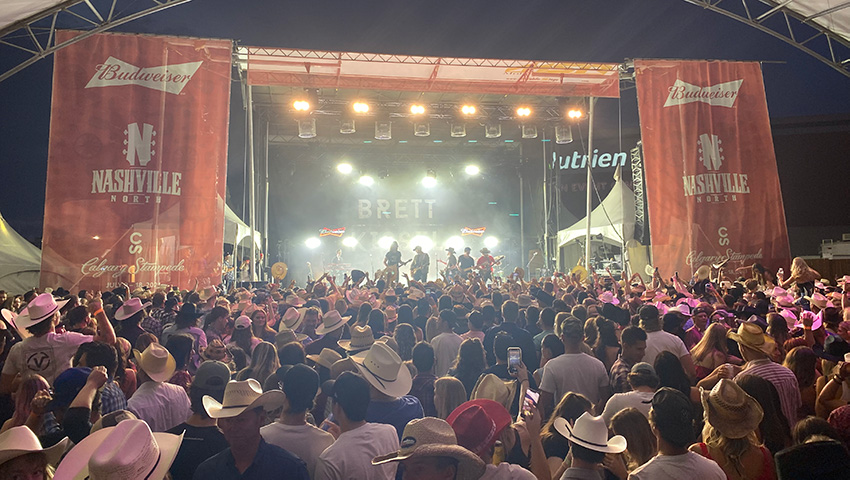 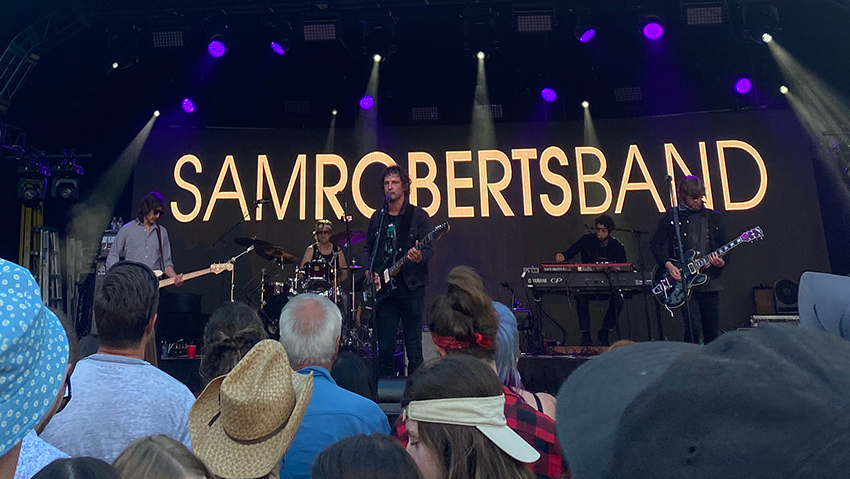 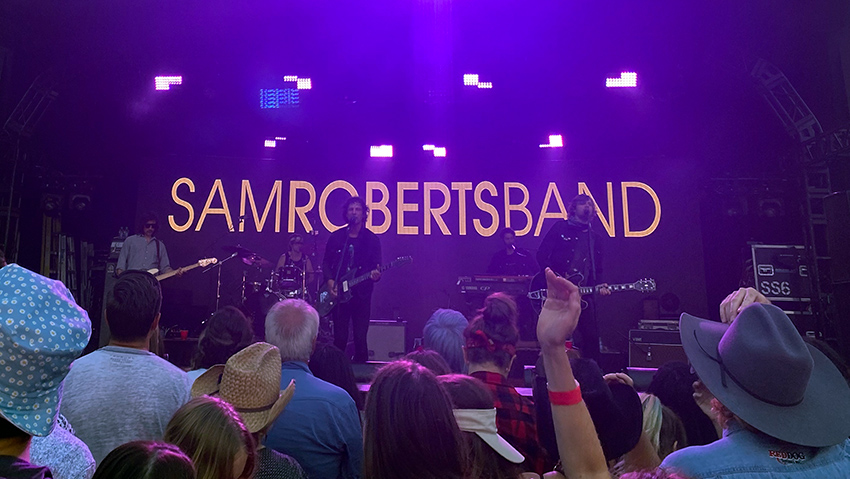 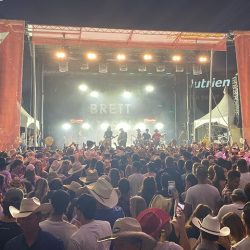 Who: Brett Kissel
Where: Nashville North, Stampede Grounds, Calgary
When: July 12
Vibe: Boot-stomping, hell-raising good time
Highlight: The adrenaline-pumping moment when Kissel threw his hand down on his guitar as smoke cannons shot up and the crowd collectively realized live music is back
Next: Aug. 7, Boots and Hearts Endless Summer, Burl’s Creek, Ontario 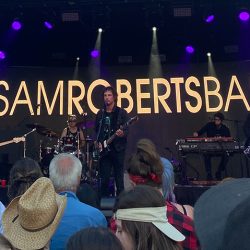 Who: Sam Roberts Band
Where: Summer Stage, Stampede Grounds, Calgary
When: July 13
Vibe: An eclectic mix of cowboys, punks, hippies and Teva dads all came together in the meditative joy of quality live music
Highlight: As the sun started setting, the crowd swelled and the more acoustic songs grew a rock backbone until it all culminated in a bumping performance of that ageless hit Brother Down.
Next: Aug. 19, Budweiser Stage, Toronto; Aug. 27, Queen City Ex, Regina

After almost two years of forced pandemic hibernation, it was hard to believe it could be real when Stampede released their all-Canadian music lineup a couple of weeks ago.

It was tough to remember what a concert would even feel like—would I be freaked out around all those people? What if someone breathes on me? What am I supposed to do with my hands? How do I talk to strangers again? It seemed COVID isolation had robbed me of all my social-jungle survival skills.

Clearly hesitant to be in a crowd but double Pfizer-dosed, I decide to pull on my trusty, dusty old boots and head to the Stampede grounds and see Alberta country star Brett Kissel and 2000s indie rock kings Sam Roberts Band perform for the first time post-COVID on July 12 and 13.

The first night, after showing proof of vaccination to a group of nurses, I head toward the main music venue, Nashville North. En route, I pass a neuron-firing medley of flashing neon lights, games-booth attendants telling kids to “step right up!” and roller-coaster riders screaming in the distance. The smell of barbecue and barnyard hay fills the sweltering summer air as I make a mental note to get mini donuts as a drunk snack later. I have a personal rule about never leaving Stampede without mini donuts.

As I step into the Nashville North tent, I immediately remember that without a few beers in you, the whole place reeks of sweaty cowboy boots. The only remedy is to drink a beer. So I do.

The crowd is buzzing—people in whatever denim, country boots and cowboy hats they could scrounge up from Stampedes past. A shared energy hangs in the air, everyone awaiting the same thing: our first concert post-pandemic. There’s an “Is this too good to be true?” feeling about it.

Brett Kissel swiftly lays that question to rest when he shows up on stage, raises his hand in the air and throws it down hard on his guitar as smoke cannons shoot up and the beat drops. Live music is back, all right.

Crushed beer cans and cowboy hats fly through the air like beach balls, boots are stomping, the atmosphere is electric. It’s Kissel’s first time performing since COVID and it shows: between songs, he says things like “Hug the person beside you. Why? Because you CAN!” and “This is the best show of my life!”

When he slows down the pace to sing “Tough times don’t last/tough people do,” in Tough People Do, he tears up. The crowd goes silent—pretty much unheard of in a place known for drunken debauchery. I have chills.

The Sam Roberts Band concert, the following night at the outdoor Stampede Summer Stage, has the exact same vibe—plus some granola hippies, Teva dads and one acid-blonde mohawk punk. It starts off slow, but as the sun sets and the low-key songs grow a pounding rock backbone, weed-stuffed torches of freedom send celebratory smoke signals up in the air throughout the growing crowd.

Turns out, it’s the band’s first time performing since COVID, too. An absolutely beaming Sam Roberts thanks the crowd at least six different times, which keeps leading me to believe their set is ending. It was probably supposed to—but when he takes the mic off the stand and starts strutting around the stage, it’s clear he just can’t stop playing. Just one more song, one more, one more. Finally, the hour-long performance ends on the existential rock bop Brother Down, not one drop left in the band’s gas tank.

I walk away from these spirited sets feeling alive and back in my body after months of sitting and staring at a screen—like I just attended a rejuvenating sound bath. I swing by the mini donut booth, grab an electric scooter and ride off into the night, a cowgirl on her trusty steed. I ride past jubilant buskers and nod knowingly at other scooting cow-people. How glorious it is to witness a city coming alive again. 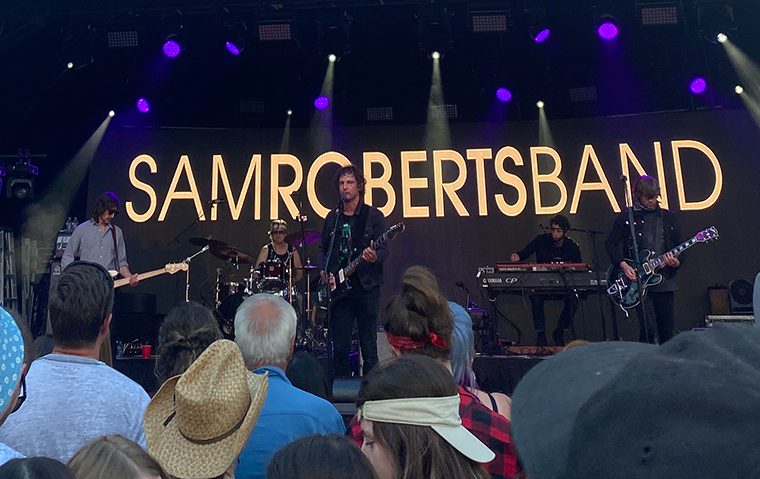 After almost two years of forced pandemic hibernation, it was hard to [...] 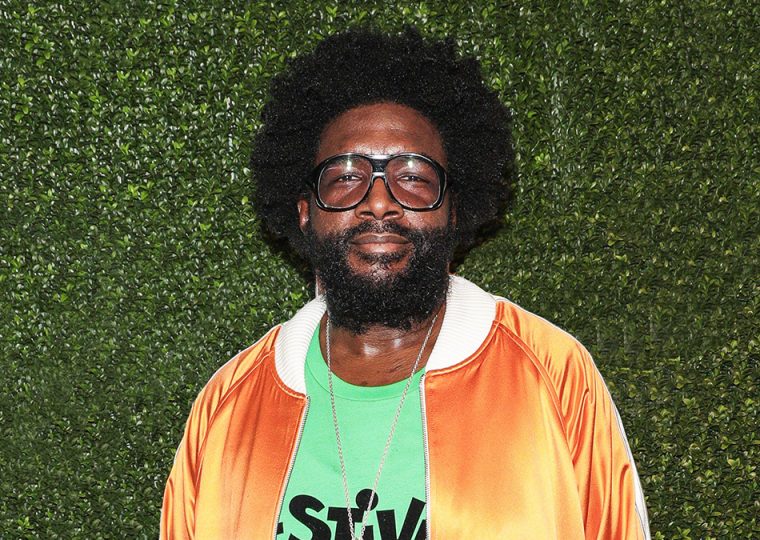 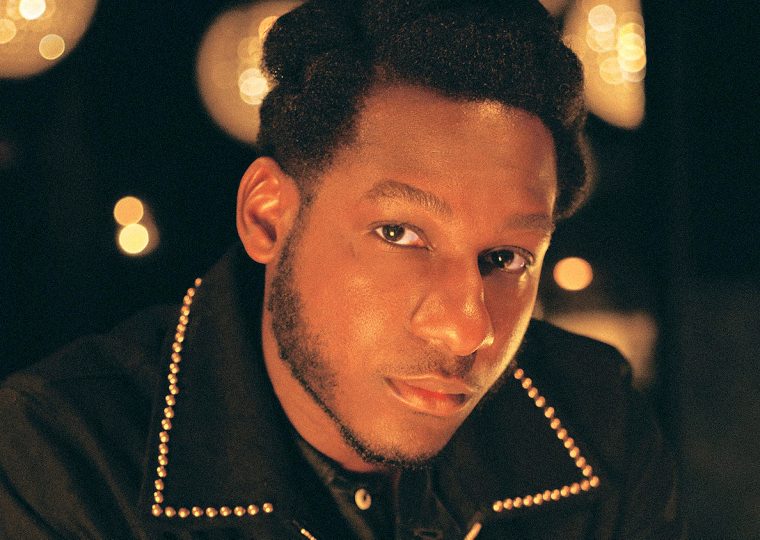 When grammy-winning soulful singing Leon Bridges tells you to buy the [...] 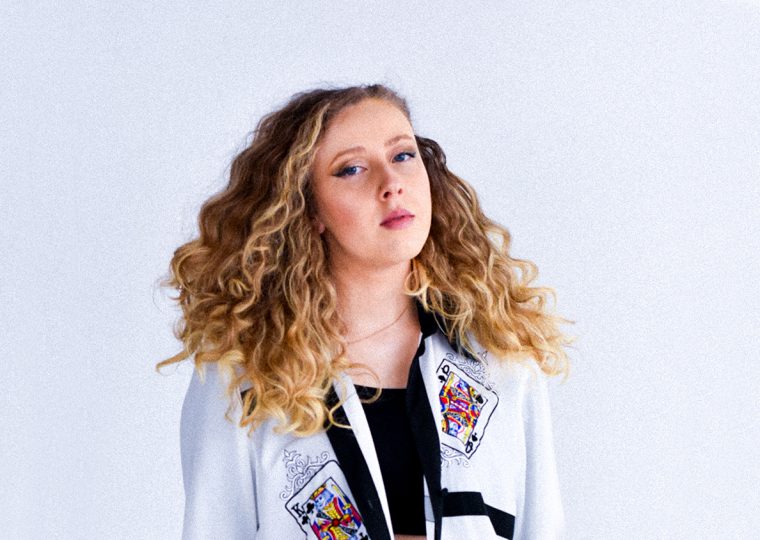 When Sir Elton John recommends an artist, you’d be inclined to check them [...]