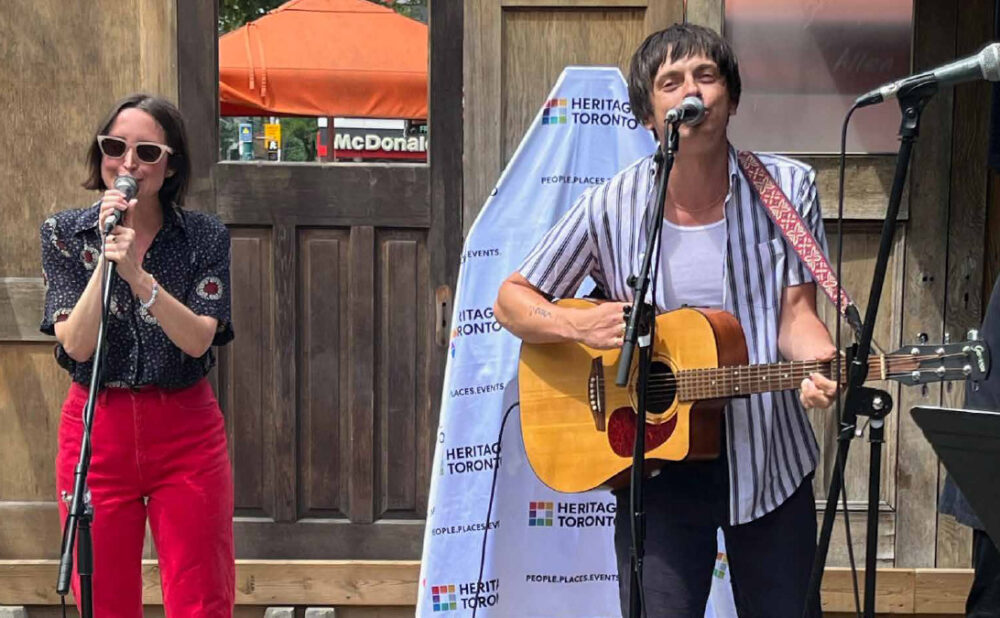 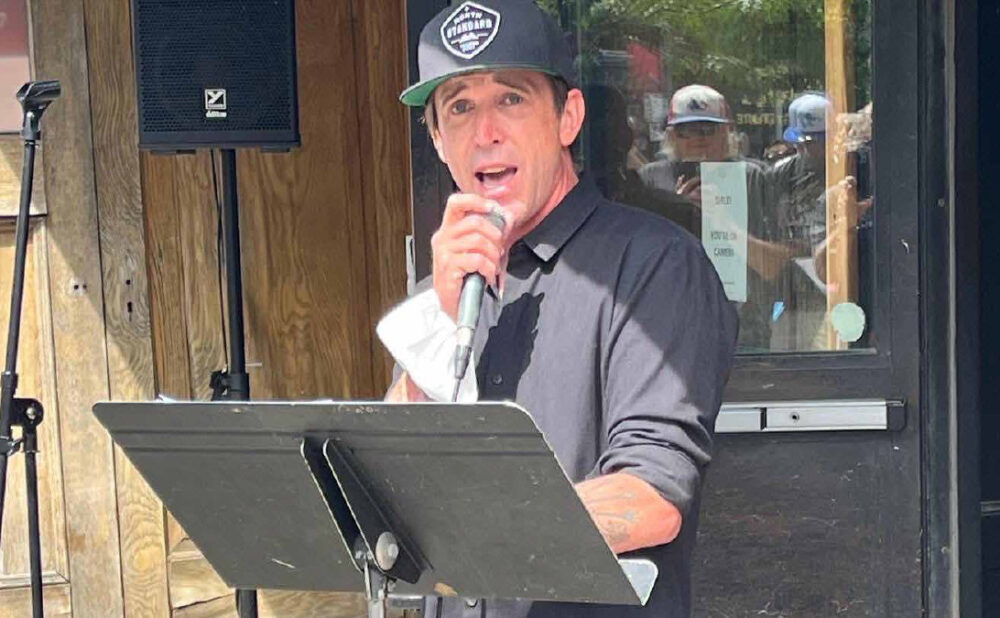 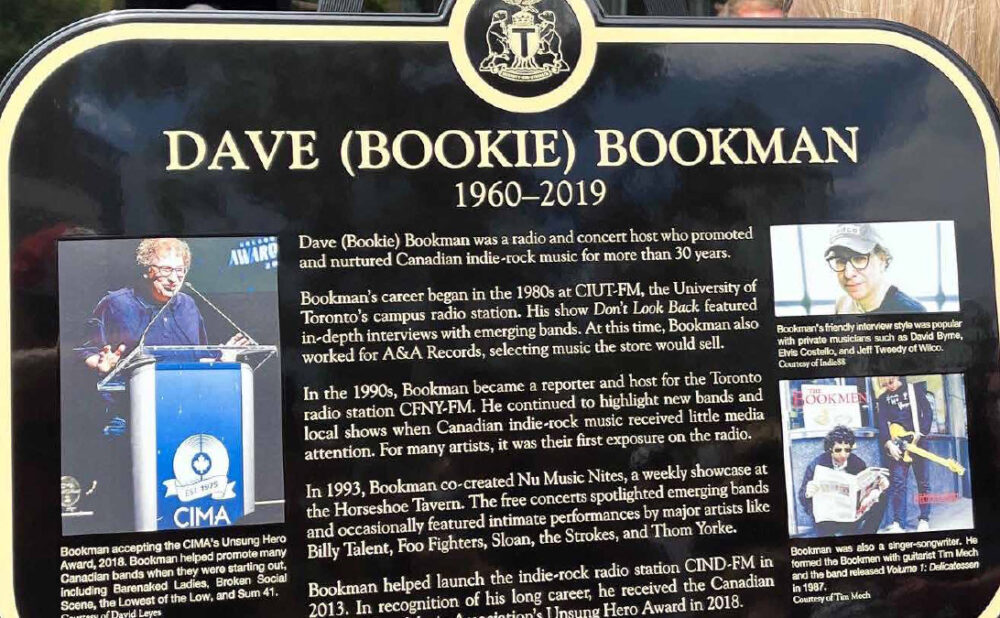 Generations of Toronto’s indie music scene were on hand outside the Horseshoe Tavern Thursday morning to honour beloved broadcaster and indie music hype man David “Bookie” Bookman, who died in 2019. Bookie was celebrated with the unveiling of a historic, permanent City of Toronto plaque outside the venue he loved.

Artists, agents, managers, promoters and fans representing the city’s indie scene from the ’90s through today gathered outside the bar where Bookie hosted his legendary Tuesday Nu Music Nites for decades, beginning in 1993. Members of Billy Talent, Arkells, July Talk, the Skydiggers, Lowest of the Low, Broken Social Scene, the Rheostatics and more all spoke to Bookie’s help with their careers, either in remarks from a makeshift stage or in respectful conversations among the dozens fondly remembering the late broadcaster’s influence.

From an early start in Toronto college radio to a professional career that saw radio stints — first at the Edge then CFNY-FM — and through a successful launch of Indie88, Bookie always used his platform to promote emerging artists, and his good taste and commitment to helping get musicians heard was legendary. Between my work as editor/publisher of NOW Magazine and launching NXNE in the ’90s, Bookie and I constantly crossed paths, often disappearing into enthusiastic conversations on the latest artist either one of us was excited about. Even now, I close my eyes and can see Bookie enthusiastically nodding his head and smiling as we shared our latest passion.

Bookie was an early, enthusiastic supporter of NXNE and helped make sure whatever radio station he was working with helped promote the festival and the emerging artists we were showcasing.

Billy Talent lead singer Ben Kowalewicz quoted Jimi Hendrix to open and close his very heartfelt and passionate formal remarks about Bookie, a man who first intimidated Kowalewicz when he was a young producer on Bookie’s Edge radio program and who ultimately encouraged and supported him when he and his friends launched Billy Talent.

Kowalewicz also used his remarks to make an impassioned declaration of the power and importance of Toronto’s live music scene and the live music experience in general, words that would have no doubt pleased Bookie.

Leah Fay and Peter Dreimanis of July Talk spoke fondly of the broadcaster and performed Misunderstood, a song by one of Bookie’s favourite bands, Wilco — a Wilco ballcap being one of Bookie’s classic looks.

Lowest of the Low’s Steve Stanley performed and paid tribute to Bookie, as did his band mates from the broadcaster’s own band, The Bookmen.

Indie88’s Josie Dye —who worked with Bookie both at that station and earlier at the Edge — ably hosted the event that peaked with the big reveal of Bookie’s plaque, which was displayed on an easel but that will be permanently installed outside the ’Shoe.

Elliott Lefko, a once legendary Toronto promoter, now vice-president of America’s Goldenvoice Concerts, producers of Coachella, successfully led the effort to see his friend honoured and was on hand for the celebration.

Dave (Bookie) Bookman was a radio and concert host who promoted and nurtured Canadian indie-rock music for more than 30 years. Bookman’s career began in the 1980s at CIUT-FM, the University of Toronto’s campus radio station. His show Don’t Look Back featured in-depth interviews with emerging bands. At this time, Bookman also worked for A&A Records, selecting music the store would sell. Bookman’s friendly interview style was popular with musicians such as David Byrne, Elvis Costello, and Jeff Tweedy of Wilco. In the 1990s, Bookman became a reporter and host for the Toronto radio station CFNY-FM. He continued to highlight new bands and local shows when Canadian indie-rock music received little media attention. For many artists, it was their first exposure on the radio. Bookman helped promote many Canadian bands when they were starting out, including Barenaked Ladies, Broken Social Scene, the Lowest of the Low, and Sum 41. In 1993, Bookman co-created Nu Music Nites, a weekly showcase at the Horseshoe Tavern. The free concerts spotlighted emerging bands and occasionally featured intimate performances by major artists like Billy Talent, Foo Fighters, Sloan, the Strokes, and Thom Yorke. Bookman helped launch the indie-rock radio station CIND-FM in 2013. In recognition of his long career, he received the Canadian Independent Music Association’s Unsung Hero Award in 2018.