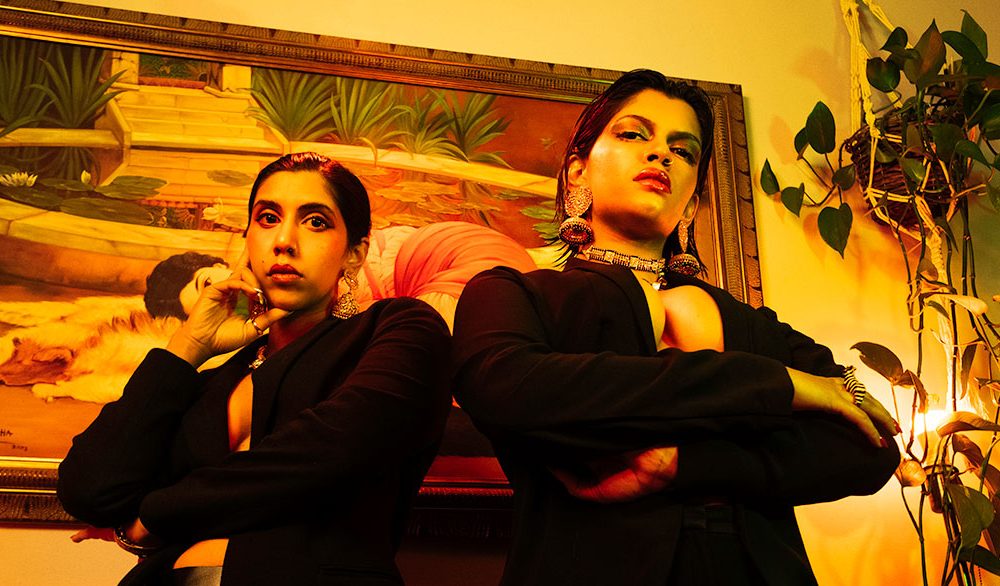 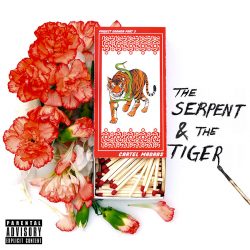 The Serpent & The Tiger

Why you should listen: These South Asia-born, Calgary-bred sisters rap about sex, drugs and being bosses over hip hop, trap and hip house beats in a wholly original genre they’ve coined Goonda rap.

Calgary rappers tap into emerging underground with no-apology approach for their big beats and even bigger attitudes.

Windows down, I’m rolling up to a red on 17th Ave. in Calgary, driving my hand-me-down SUV, when the next song comes in hot. I typically like the volume loud, but this track gives a whole new meaning to the word: the frame of my absolute mom-mobile starts vibrating, smacking me from all angles with sonic waves of booming bass, hard-hitting rap flow and a layer of Tamil instrumentals that reminds me of M.I.A.’s Bad Girls.

Needless to say, heads turn in neighbouring cars and on pub patios—all courtesy of Calgary’s own Cartel Madras. My initial embarrassment at attracting so much attention is immediately eclipsed by how baller the music makes me feel.

The light flicks to green, and I’m ready to go—just like this about-to-break, badass sister duo known for their unapologetic rap and circuit-breaking live shows.

When I catch up with Contra and Eboshi (born Priya and Bhagya Ramesh), they’re up north—far north—of the Calgary underground hip hop scene they helped to grow. 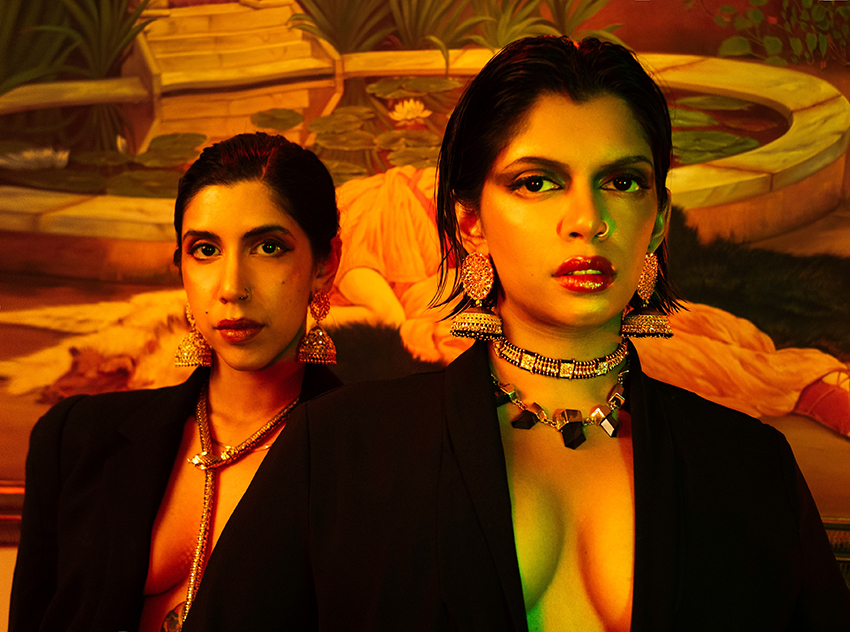 Calling in via Zoom from Yellowknife, the sisters have just been set free from a two-week quarantine that had them locked in an Airbnb with two other music groups—the isolation period was turned into an artist-in-residency program while they waited to perform at the Folk On The Rocks music festival.

“It was pretty cute, like artists’ summer camp,” they quip. Their intellect and humour throughout the interview make it easy to understand how they come up with such scintillating bars and move-your-body-beats.

As Cartel Madras, they’re known for live performances that hype up the crowd until it’s all one big, bouncing mosh pit. But, in a raw, animal-kingdom type of way, fans instinctively leave a ring of space around them, not daring to enter the Queen Bees’ ring. Call it intuitive social distancing. With whip-tongued flow, both sisters are undoubtedly alphas, but they don’t try to elbow each other out of the way—their sound is so big, it requires the power from both of their batteries.

Folk On The Rocks will be their first performance since the pandemic.

“It’s going to be good to get back on stage, truly. It’s going to be sick,” enthuses Eboshi. They’ve been building new audiences and fuelling the fire ahead of the drop this month of their third EP, The Serpent & The Tiger. Though their earlier releases leaned more towards party rap, the new record is a mix of lush and glossy house beats, smooth and seductive like a snake, and take-no-prisoners rap bars that roar like a tiger.

“Half of our EP is this kind of sexy, moody, illusory sound. The other half is the loud, banging anxiety that comes with this really tense era that we’re in,” explains Contra. “How can it be a bit more experimental and still exciting without needing to be at a club? If it were to go to a club, it could still pop off,” she says matter-of-factly, “but it’s like, can you drive around your city during a pandemic, smoking weed and listen to something?” Yes Contra; yes, you can. 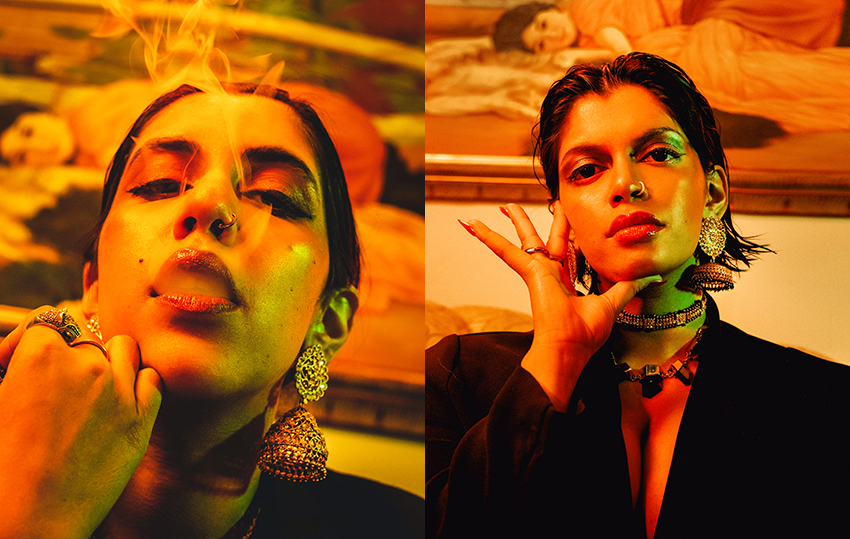 Chennai-born and Canada-bred, the sisters formed Cartel Madras’s raw, renegade sound not in an epicenter of rap and hip hop, like Chicago, L.A. or Toronto, but in the Prairies—more specifically, in Calgary, where they’d immigrated as kids. Using a South Asian term for “thug,” the self-described music nerds dubbed their sound Goonda rap.

“Goonda rap was really our way of being able to pay homage to all of the subgenres of hip hop that came before us, that influenced us, but that we cannot claim to be a part of—two brown girls who grew up in the Prairies and are from South India,” says Contra.

Growing up in Calgary, a city stereotyped as being all about country music, Stampede and a lot of voting blue, there wasn’t much of a hip hop scene for the sisters to jump into and learn from—let alone one with any queer-identifying South Asian women in it.

Though they yearned for that type of supportive space, there was a beauty to the tumbleweed emptiness of their frontier environment: it was all unwritten. Eboshi and Contra were free to create whatever the hell they wanted.

“We were like, there’s no way Calgary is going to fuck with what we’re doing,” recalls Contra. “There was always that sentiment. But I think some of the ways in which the city did support us is very indicative of an appetite for counterculture in a city like Calgary—not everyone is an oil baron,” they continue.

“Goonda rap was a way to be, okay, we’re doing something new. New stories, new sounds. It’s not just hip hop—you hear punk, you hear house, you hear a lot of different electronic influences. It’s our way to do whatever we want. We’re just going to do our thing.”

Around 2018, Calgary was starting to take notice of Cartel Madras’s adrenaline-pumping Goonda rap, but it wasn’t quite sure what to do with the duo: the sisters briefly reference being booked for a few confusing brunch gigs, where they performed while diners picked at their poached eggs.

“Really weird. Illuminating. It was Calgary trying to shoehorn you into the venues they had,” is about all they have to say about that.

Accepting that the existing music venues weren’t open to booking underground rap, hip hop and trap gigs, Eboshi and Contra took matters into their own hands.

“We were going to flip this random house and make it into this party that’s reminiscent of a Bay Area warehouse or a London garage. We were trying to attract someone who’s more creative, more cutting edge, more willing to come out of their box.” 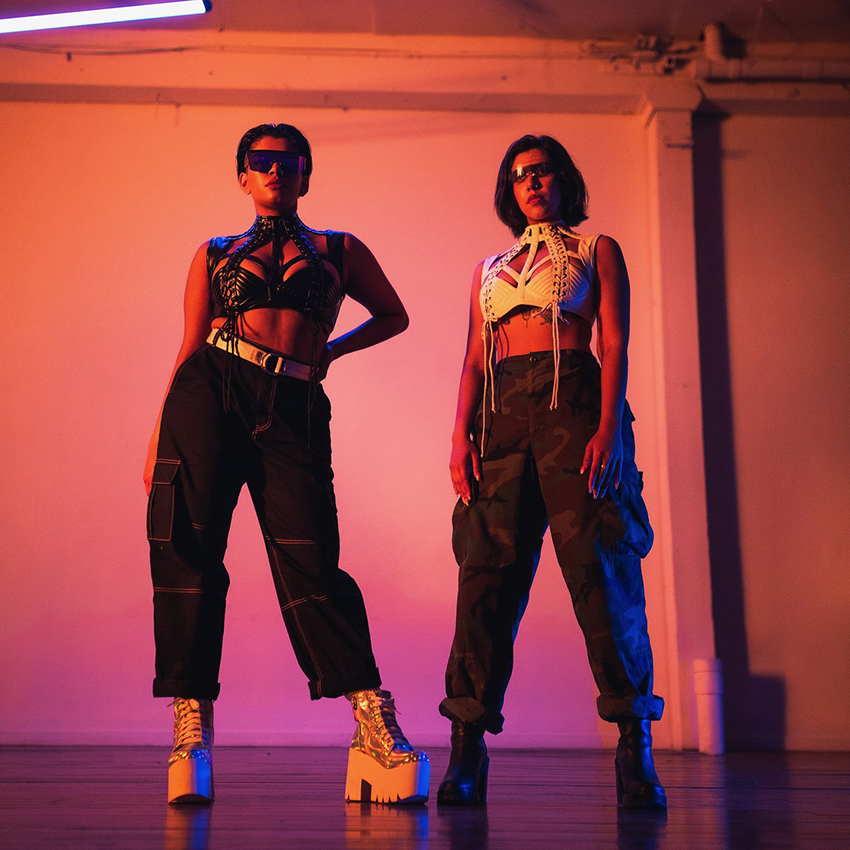 The sisters also booked some local artists for the party that they deemed worthy of hyping a crowd, and pinpointed a venue in the yuppie, riverside neighbourhood of Kensington.

“We were like, we have this house that this very nice couple has agreed to let us essentially destroy for the night. We kind of told them it was going to be small, and then we were like, actually, 100 people are coming. They were panicking. When it began, they were like, ‘what’s happening?!’ And we were, ‘fuck it, you guys agreed, we’re in now,’ Eboshi laughs, recounting the interaction with the same no-fucks-given attitude she channels onstage.

Fitting, then, that they named the party Sansfuccs—and that they eventually founded a collective of YYC artists by the same name after the success of that night.

“We had to go to the neighbours and tell them it was going to be really loud, please don’t call the cops. They did call the cops…it was a really lovely house.”

Advertising the Sansfuccs party via Instagram, they sold out immediately—evidence of a growing hunger for the type of music they were making. Today, between establishing a fanbase online and hustling between Calgary and Toronto, Cartel Madras’s Goonda rap is continuing to gain traction.

“There’s been an explosion of underground hip hop in Canada in the past the past four years,” Contra enthuses.

Buckling up and riding it, the sisters played high-energy shows every weekend until COVID struck, constantly putting out new music and working their asses off to make a name for themselves in an industry in which they had zero connections. And, though their Goonda personas might make it seem like they’ve got a habit of making enemies alongside a “too good for you” attitude, the sisters continue to lift up fellow creatives as they rise to the top.

It’s really kind of the most fucked up thing you could do to an Indian parent. Create a career where you’re artistically open about your sexuality and partying.

“Sometimes the people beside you are the most talented people,” Contra asserts. “It’s always been: if we’re going do this, we’re going put other people on too. We’re going to wear other people’s clothes, bring in cinematographers that we know—just really incredible creatives who won’t actually get their shine, get their respect officially in this industry,” she explains with conviction.

Jumping in, Eboshi says, “The roster of creatives and intellectuals that we work with—none of us had a shot at hitting anything close to the mainstream until much more recently, now that it’s definitely ‘trending’ to be a person of colour. We’re getting a lot more airtime.”

Rather than rejecting the attention for its tokenist foundations, Eboshi and Contra are using it to bust the door wide open, like the smart businesswomen they are.

The sisters’ relentless drive is a trait instilled in them by their parents, who put them in a Calgary school hoping it would be a pipeline for their daughters to become STEM prodigies.

Then one day they blinked, and we were like, so…remember when you wanted us to be lawyers? We’re rappers now.

“We reacted to that environment by going the other direction entirely,” says Contra, explaining that English and social studies were their preferred subjects.

Eboshi continues: “They were like, okay, that’s fine, as long as you do the thing where you become a lawyer. We can handle that. Then one day they blinked, and we were like, so…remember when you wanted us to be lawyers? We’re rappers now.”

“It’s really kind of the most fucked up thing you do to an Indian parent. Create a career where you’re artistically open about your sexuality and partying. It’s a nightmare. To be completely honest, it is every immigrant parent’s worst fucking nightmare,” Contra says, emphasizing the last three words.

Despite their extreme rebelliousness, the sisters acknowledge that they “manage to sometimes be what our parents want, through always valuing quality and success.”

Apart from their mom and dad, their entire family lives in India—and the sisters haven’t had the opportunity to return since they became Cartel Madras. One can only imagine how the “so…what do you do now?” conversation would go down at a family reunion.

“One of our aunts follows us on Instagram. Every once in a while, she comments on one of our photos, saying ‘great job girls!’ It’s really sweet. I don’t think she’s, like, really seen FEAR & LOATHING yet…” Eboshi chuckles, referencing a racy music video off of the new EP. Though their explicit, take-no-prisoners rap would be quite a shock to their family members in the Southern Indian states of Kerala and Tamil Nadu, the sisters continue to honour their culture through their work.

The iconoclasts make a brilliant mockery of binaries as they swagger and spit bars, channelling their masculine energy in aggressive verses and their feminine magic with house beat hooks. They capitalize on the freedom of their Western upbringing by pursuing a rap career while acknowledging their first-generation background in cheeky, head-swivelling lines. When you play Cartel Madras, be sure to roll down your windows for optimal enjoyment.