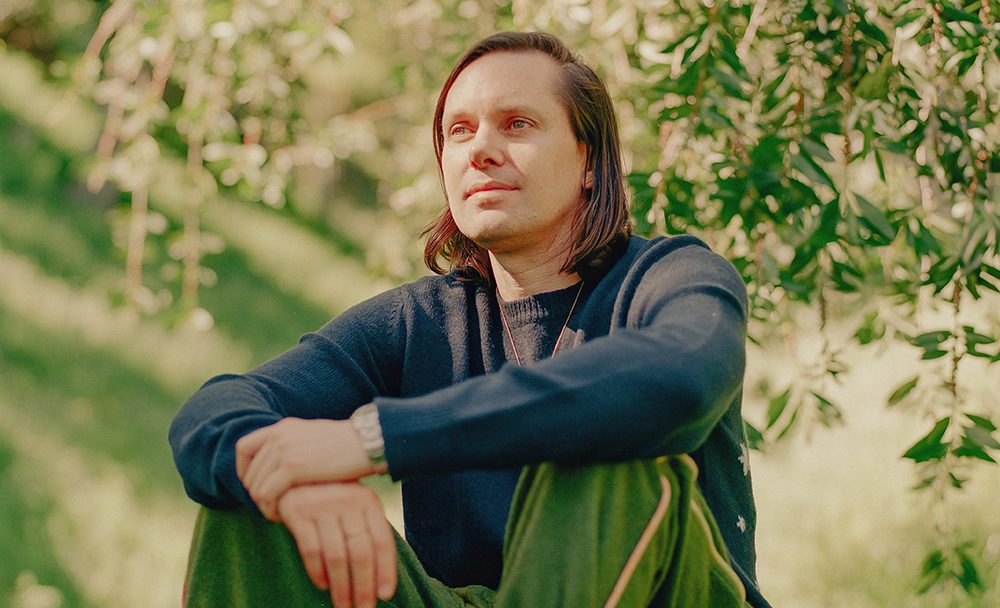 If you or someone you know has been affected by sexual or domestic abuse, we provide these resources in Calgary, Toronto and Vancouver. For additional resources across the country, see endingviolencecanada.org.

Atop sun-drenched California cliffs lies a home recording studio, its walls humming with an ethereal voice as calming as the hypnotic waves below. Just outside, top-of- their-game musicians glide in and out of the home, laying down tracks together or jamming in psychedelically lit rooms.

Though it may sound like a freewheeling scene straight from Laurel Canyon in the 60s, Joni Mitchell and the Mamas and the Papas are long gone. Located just up the coast in Topanga, this home belongs to Mike Milosh, a Toronto-born-and-raised musician who performs as Rhye and is celebrated for his sultry androgynous sound. When the world locked down last March, his new digs became a hive of creativity for his A-list quarantine bubble.

“I’m not letting the pandemic slow me down,” says Milosh, a classically trained cellist. “Art is the only saviour right now.”

And save himself it has. Between recently being featured on the closing track of his buddy Diplo’s ambient MMXX album and collaborating with It-Brit club producer SG Lewis on the shiny dance jam “Time,” Milosh also wrote, produced and recorded his excellent, just-released fourth studio album, Home. Its 13 songs are an emotional striptease—track by track, the listener’s layers are peeled back as bows lick soothing strings, finely tuned compositions stimulate the senses and breathy vocals call for closeness. It’s steeped in the signature Rhye brand of intimacy that a socially distanced world is craving.

“I would love it if people listened to the whole thing, because the intro and the outro take you in and out of that home world.”

“I knew I wanted to christen the house by creating this record. There was a spiritual calling for me to make the record in that house,” says Milosh.

Perhaps that has something to do with the fact that he shares it with his life and creative partner, Geneviève Medow-Jenkins.

She’s the muse featured on the cover of his stirring 2018 release, Blood, as well as his latest record—photos both shot by Milosh. The duo is very hands-on in creating the Rhye aesthetic: they’ve each served as director, producer and creative director for videos off the new album. Milosh has also worked the camera and edited.

“Creativity is the root of our relationship,” Milosh says.

And the pair found more than driftwood and seashells on the shore as they became beachcombing buddies with nearby neighbours and fellow creative couple, Tenet actor Aaron Taylor-Johnson and his Fifty Shades of Grey director wife Sam Taylor-Johnson. Aaron dances shirtless sans inhibition in the video for “Black Rain,” a disco-hued groove off Home.

“I was pretty nervous to ask Aaron, because he’s a huge actor,” Milosh laughs. “I texted him, I was like, ‘Would you ever dance in a music video?’ and he wrote back, ‘Yeah absolutely, would you want Sam to direct it?’”

What was supposed to be a casual camera test at the Taylor-Johnson household turned into the video itself when Aaron began to move. “It was that moment where it was like, no, this is what we’re supposed to do. It’s just supposed to be Aaron, unabashed, being free.”

Milosh is quick to praise the work ethic of the actor- director couple, admiring their ability to seamlessly switch between parenting—they had just put the kids to bed prior to filming—to collaborating artistically.

“She pushes him, and he wants to excel. Watching them together, I was so inspired.” An artistic force in their own right, the same could be said of Milosh and Medow-Jenkins.

Rhye isn’t their only collaboration, though. They first met in 2016, when she contacted him to perform at an ambient music night she founded in L.A. called Secular Sabbath. The recurring event at changing locations sees big names and up-and-coming acts improvising hours-long sets to blissed-out attendees lounging on plushy pillows, partaking in tea ceremonies or melting into soothing massages. In this Garden of Eden setting, the goal is to relax.

But now that chilling out in a thermal bath with strangers (as celebrity attendees did at a 2019 edition of Secular Sabbath in Palm Springs) sounds like a biohazard, the event has shapeshifted. It’s a recurring livestream with Milosh and Diplo, the two letting loose while ad-libbing sets at the Topanga home base. They surround themselves with candles softly glowing gold and a strobe projecting atmospheric rainbows—it’s trippy.

“It’s the antithesis of a Rhye show,” Milosh says, “but they feed each other creatively.”

With his artistic yin and yang energies in check, he sits serenely in his hilltop haven, its foundation fluttering with loving frequencies. Just as art has been a refuge for Milosh amid the chaos, Home is his heartfelt invitation for listeners to join him.

“I would love it if people listened to the whole thing, because the intro and the outro take you in and out of that world,” he says with a gentle power. “Home is hopefully cathartic to people in this time.”