The Unbearable Lightness of Emily in Paris

The Carrie Bradshaw Complex and The Great Atonement: Season 2 almost makes up for last season’s sins.

Of all the ringarde designer hats Emily Cooper wore in season one, she’s finally put on the dunce cap. 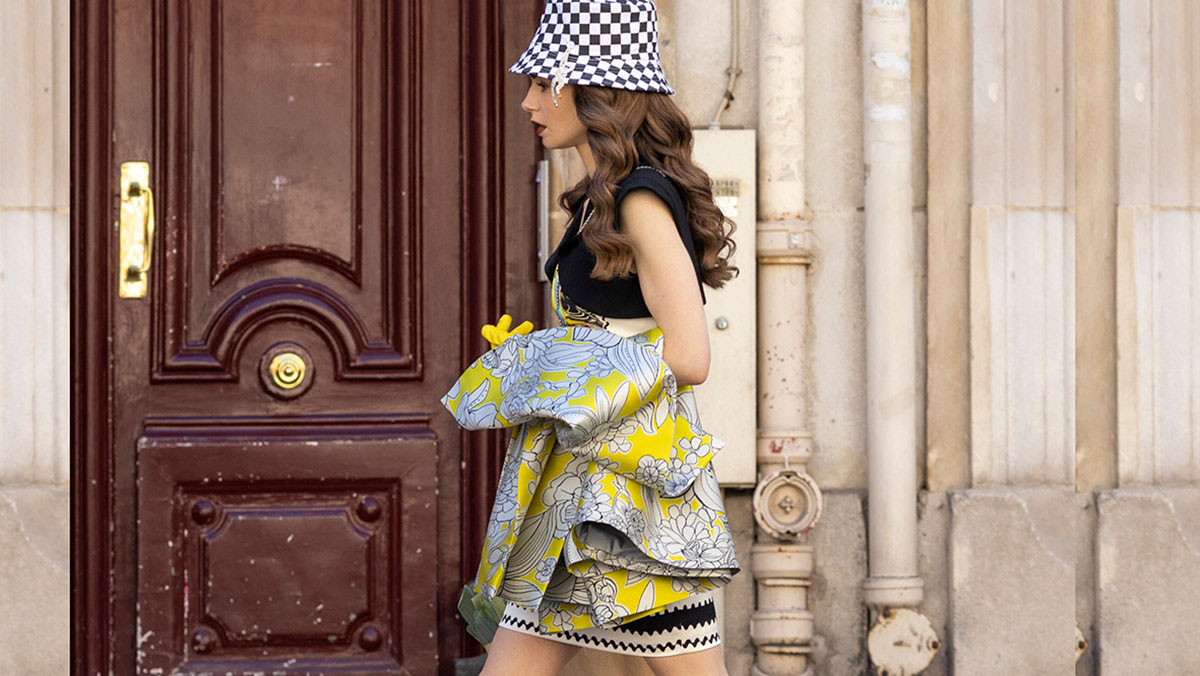 Emily in Paris was one of the most hated and most watched shows on Netflix last year: 58 million viewers tuned in during dark, depressing COVID nights for its confectioner-sugary escapism about a twentysomething American PR girl who moves to Paris. These same viewers were quick to stand on the internet’s soap box and preach about why it was certifiable TV trash.

For good reason: its whitewashed vision of Paris — the second-most diverse city in Europe — gave the whopping two racialized characters (Emily’s new friend, Mindy, and co-worker, Julien) little to no substance in the show, its hyperbolic and often inaccurate portrayal of the French pissed off the entire Netflix-watching population of the country and its lack of character arcs was just plain boring.

Celeb producers Lily Collins and Darren Starr (creator of Sex and the City TV series) read all the hate mail. In Season 2, they attempt to right the wrongs of Season 1 by poking just as much fun at Emily as the Internet has. It almost atones for its sins.

At last, Emily actually goes to French classes — and has to repeat a grade. She goes to St. Tropez with her fashion heir fling — and gets dumped. Camille ices Emily out after discovering she slept with her boyfriend, Gabriel. Emily is called an “illiterate sociopath” in the insult of the century. There’s schadenfreude aplenty in watching her feel the heat for the havoc she’s wreaked.

Don’t get me wrong: I thoroughly enjoy this show. I’m that annoying girl who went to France on exchange — this wanderlust brand of fluff is my baguette and butter. It’s completely unrealistic, absolutely fabulous and light as a feather. But that’s exactly where it tends to go wrong; in not taking itself too seriously, Emily in Paris doesn’t think things through. Though the creators certainly listened to viewer feedback by increasing diversity in front of and behind the camera, much of its response consists of half-baked side plots that put the “lazy” in “laissez faire.” Yes, it’s the lightness we need in COVID times, but sometimes it’s unbearably so. 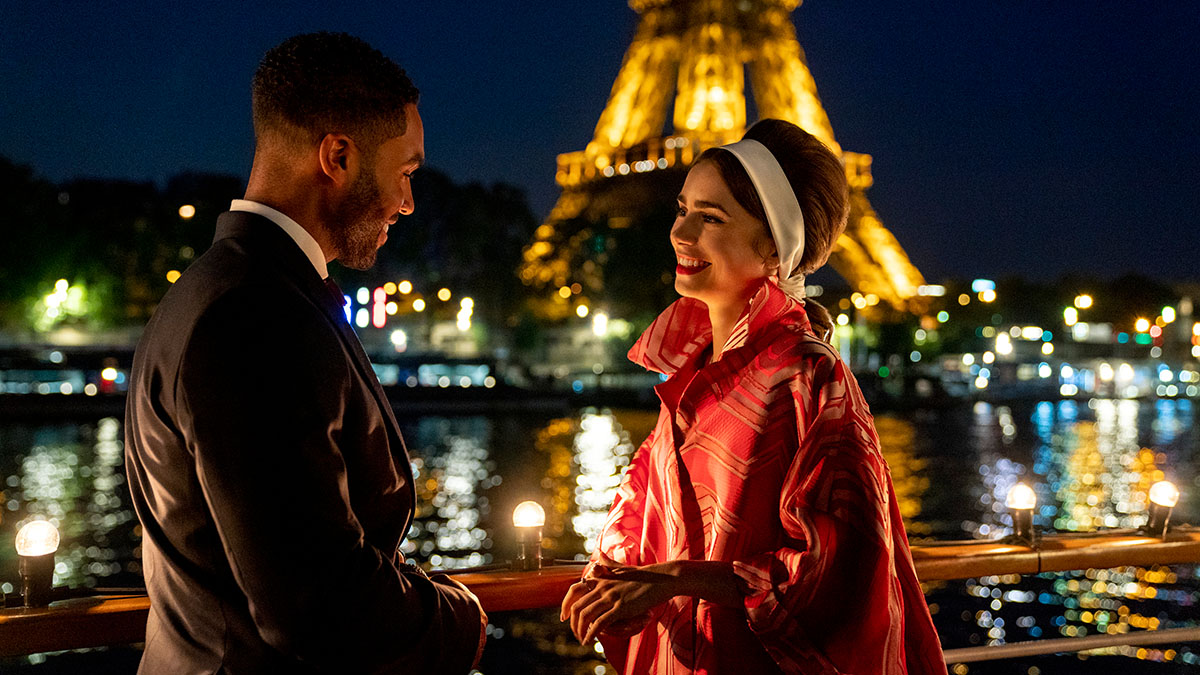 Exhibit A: Emily’s new love interest, a smooth-talking, James Bond-type British businessman named Alfie. The two meet in French class, and he immediately writes her off as the annoying American girl. It’s not long before her theatre-kid peppiness and persistence charm him. Actually, pretty much every straight guy she meets wants to sleep with her (moment of silence for Camille’s 17-year-old brother, whose virginity Emily took in Season 1. Lest we forget).

Alfie is hot. Alfie is intriguing. Alfie is a bit of an ass in the flirty way that makes you want him to like you. And yet, Alfie is a two-dimensional plot device, there only to make Gabriel — Emily’s love triangle forbidden fruit — jealous. We never get the backstory on Alfie or see him in any scene that doesn’t involve Emily. In short, he’s not much more than a hunk of man meat, because Women! Can! Objectify! Men! Too!

This show is in dire need of its own Emily-branded Bechdel test. 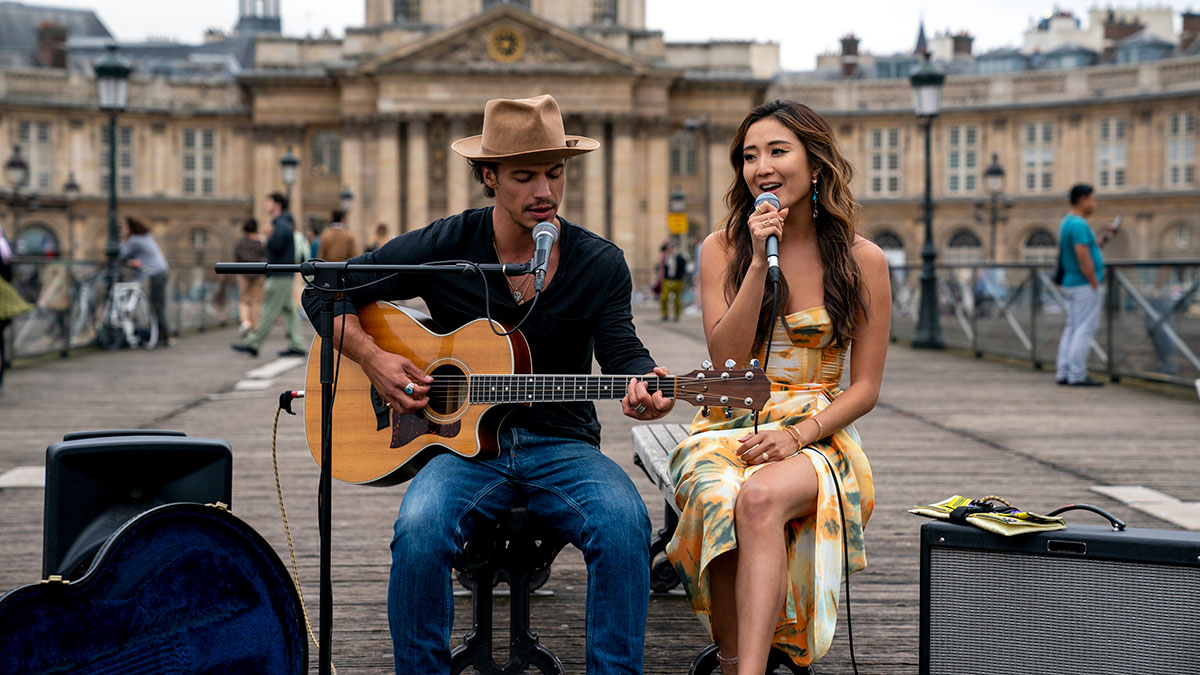 Then there’s Emily’s bubbly friend and roommate Mindy, the failed Chinese Pop Idol contestant from Shanghai. In Season 1, she was nothing more than an ear for Emily’s problems and a mouthpiece for offside cultural stereotypes and corny sex jokes (“I’d like to bon appétit him!”).

And finally: Emily. I feel inclined to cut her some slack in light of the calamitous cultural discourse thrown her way after Season 1. I want to like her; I just can’t figure out if the writers want me to or not. Her Carrie Bradshaw complex is growing by the day. FYI: that’s not a good thing. In Sex and the City, Carrie is a sex writer but frequently sex shames others. She also cheats on her boyfriend, having an affair with a toxic ex (speak of the devil: R.I.P. Mr. Big and Chris Noth’s acting career).

Emily also has a history of closed-mindedness when it comes to the less savoury bits of French culture, and the saga continues this season. When she visits a hammam with Camille and her French girlfriends, everybody goes topless — but Emily refuses. I’m all for doing what you’re comfortable with, but this was the opportunity to explore a queer storyline with Camille and Emily — there’s already been tons of speculation on it — instead of the saggy old trope of female competition over a guy. Which, of course, brings me to the fact that Emily slept with Gabriel, Camille’s ex, and spends much of this season trying to pull the wool over Camille’s eyes. Plain and simple: Emily is a bad friend. Everybody wants to be a Carrie or an Emily until they look beneath the glamour. 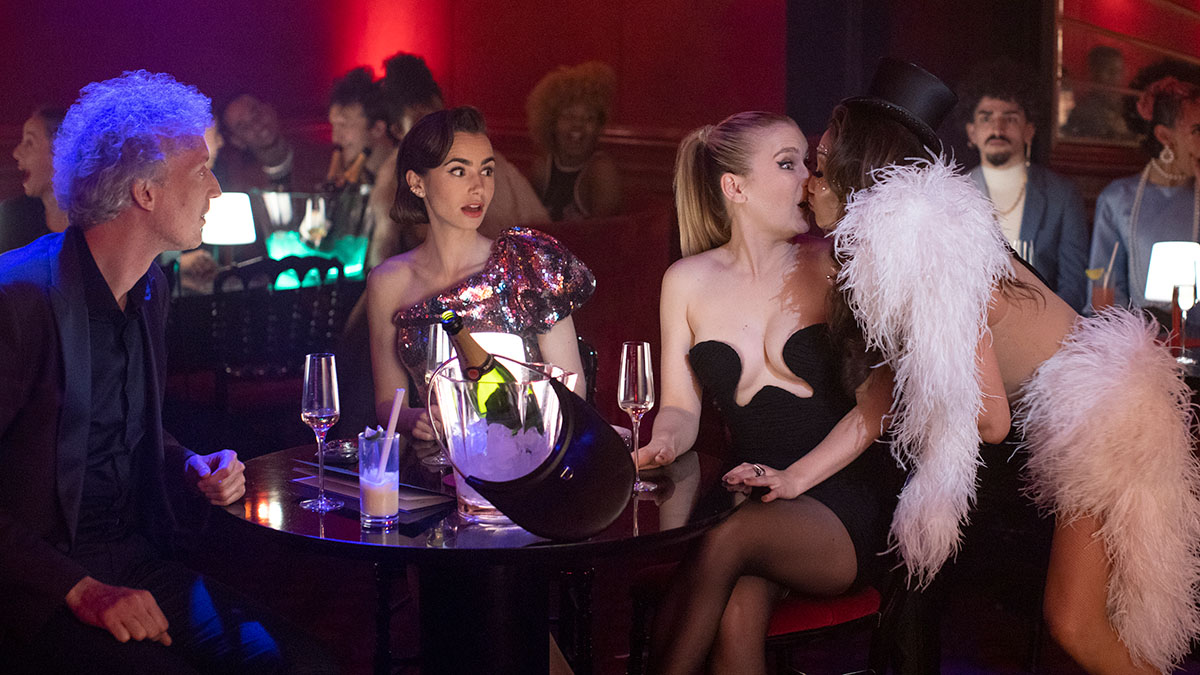 Nothing is more swoon-worthy than the perfectly impractical outfits in romcoms. Court jester pants and a plaid paper boy cap for a casual day at work? Oui! A bow on your bust so big it soaks up all the béarnaise sauce on your plate? Très bien! Golf gloves in every colour inexplicably worn at the office? Bien sûr! Of all the implausibility in this show, the fashion is the cherry on top. It’s one instance in which lightness is perfectly appropriate.

With a star-powered production team (including famed Sex and the City costume consultant Patricia Field) that mingles with fashion elites, it’s shocking that there are no celebrity designer cameos. Remember Heidi Klum in Devil Wears Prada? Vera Wang in Gossip Girl? The time Carrie tripped down the Dior runway in Sex and the City?

Let me paint you a hypothetical Emily in Paris POV: Instagram’s favourite French designer, Simon Porte Jacquemus, and his famous pup, TouTou, stroll into the Savoir offices asking for help promoting his new eau de parfum. Not only is it completely plausible, it would break the fucking internet. Instead, we get fictional designer Pierre Cadault, knockoff Viktor & Rolf statement gowns and a lingerie line so kitschy it looks like Kim Kardashian’s Skims teamed up with American Apparel’s 2010 colour palette.

My theory here is that the vitriolic cultural discourse surrounding Season 1 blacklisted the show. Celebrities are already prone to controversy; the last thing they want is to willingly attach their name to another one. Season 2’s Great Atonement — flawed as it may be — seems like the creators are attempting to put Emily in Paris in the public’s good graces so that it might join the ranks of pop culture darlings like Gossip Girl. A plot twist at the end of this season looks promising for its future.

I’m taking Season 2 for the entertaining improvement that is. Pour a glass of wine and enjoy the glitzy 30-minute lobotomy it offers, and we’ll all cross our fingers that Season 3 will be the charm. 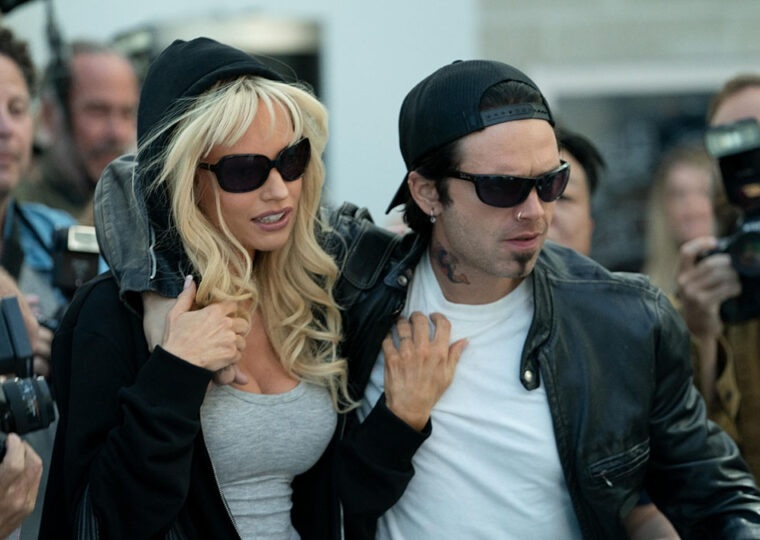 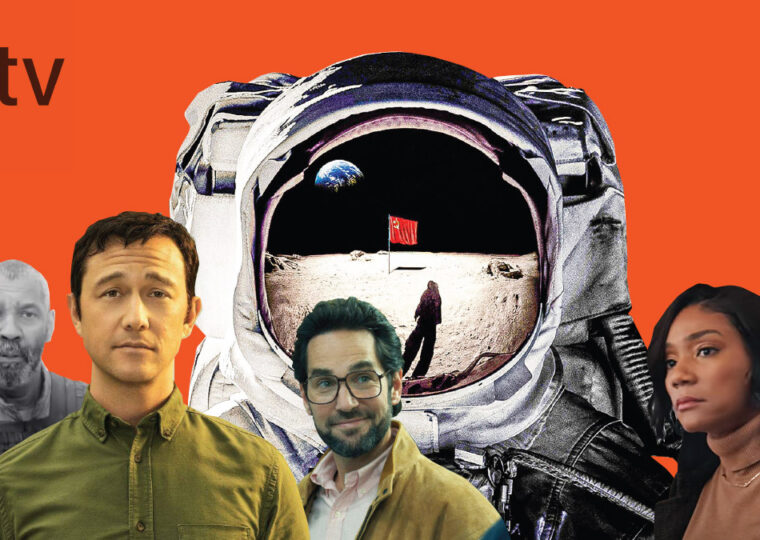 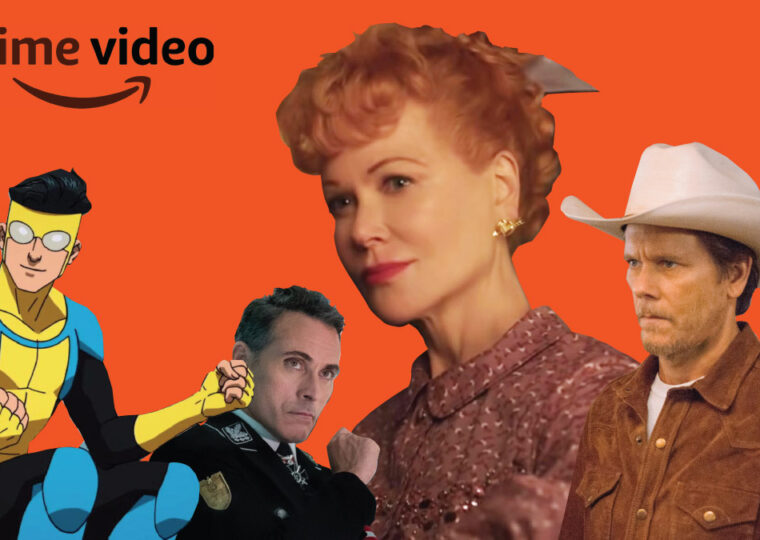 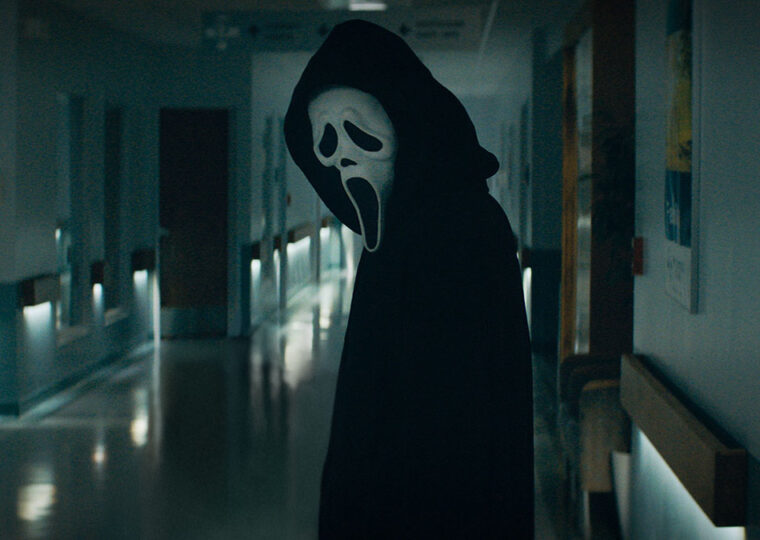 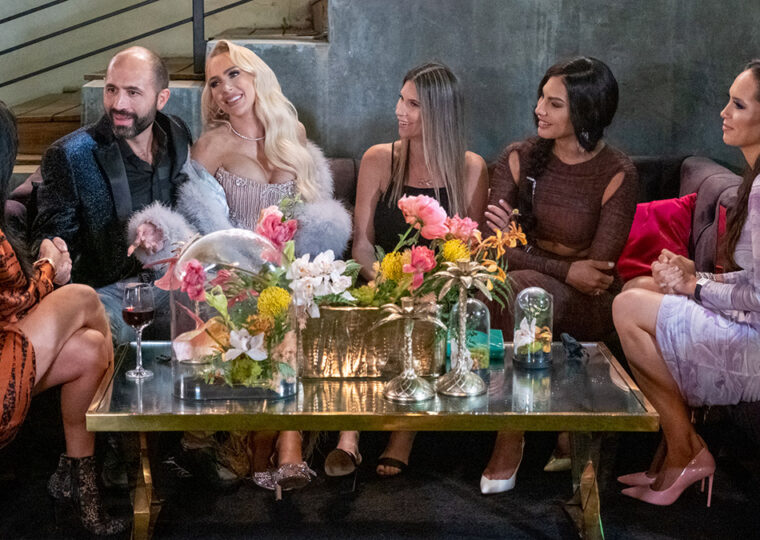